A revisit to Sixth Street Specials 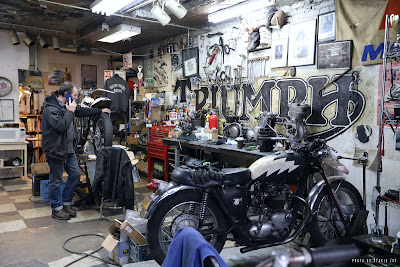 To call Mr. Mackie, 61, a dying breed is probably an exaggeration, but maybe not here. Nestled between Avenues C and D in the East Village of Manhattan, his motorcycle garage, Sixth Street Specials, is among the last in the borough, a vestige of a neighborhood that scarcely resembles its past — and of an iron-horse culture that the city seems determined to throttle.

There used to be more places like this in Manhattan: four or five in the East Village, Mr. Mackie guessed, and maybe a dozen more farther downtown. Now they’re in North Brooklyn. Some resemble fashion boutiques, tailored to the tastes and money of upwardly mobile guys who want the glamour but not the grease.

You can read the full piece, with nice black-and-white pics by Daniel Weiss, here.

Meanwhile, you can revisit Stacie Joy's photo essay and interview with Mackie for EVG back in March. You can find the post at this link.
Posted by Grieve at 9:00 AM

LOL "Meanwhile, you can revisit Stacie Joy's photo essay and interview with Mackie for EVG back in March. You can find the post at this link." heh. long live the Grieve!

It's the real deal and I cannot imagine why anybody riding a bike wouldn't go here for the special atmosphere and service.