Reports: 89-year-old woman attacked in her home, robbed of money for husband's tombstone

In case you missed this widely reported story yesterday: An 89-year-old woman who lived in the Jacob Riis Houses on Tenth Street and Avenue D was attacked and robbed.

According to published reports, the suspect followed Maximina Osorio home from a nearly grocery store on Saturday morning. According to police, the man then forced his way inside her home, where he punched and shoved her to the ground. He blindfolded Osorio and demanded the money that she been saving for her late husband’s tombstone.

Osorio says the man knew exactly what he was after: $5,000 she spent two years saving to buy a headstone for her late husband's grave. Police say the frightened woman told the thief the money was in her bedroom, in a drawer.

Osorio and her husband, Salvatore, were married for 50 years.

She says she had mentioned to people she was finally ready to buy the headstone and that may have been why the thief targeted her.

Police are now looking for this man who weighs about 160 pounds, 5'8" tall, with a full beard.

With the money gone, Osorio says she has no choice but to start saving all over again.

Police say the man had an accomplice, but are focused on the suspect pictured below... 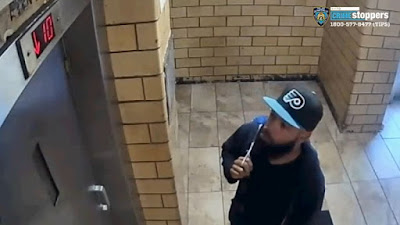 Please snitch on this...

What a loser. Nice clear picture though, so it should be easy to catch him. I hope she gets her money back, but he probably lost it all by now at a casino.

What a low, vile thing to do. I'm in favor of throwing this punk into the East River, preferably blindfolded.

Anyone wanna help me organize a GoFundMe?

Where can we donate?