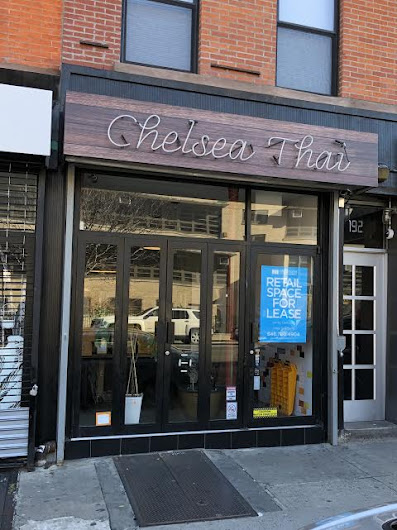 [Photo from January by Steven]

Koko Wings will be setting up shop at 192 First Ave. between 11th Street and 12th Street.

This will be the second NYC location for the restaurant (the other is on West 106th Street) that specializes in Korean fried chicken.

Here's how our friends at the Westside Rag described the UWS menu when it opened in 2014:

According to Meridian Retail Leasing, this space will also feature an 800-square-foot backyard.

This storefront was home for a brief five months to Chelsea Thai, which closed in January — this after 21 years in the Chelsea Market. Chelsea Thai founder-chef Saruj Nimkarn said that there wasn't enough business here to make the rent.

The address was previously the Neptune. The Polish-American diner closed in December 2016 after 15 years in business. According to one source, the rent doubled.

After Neptune's departure, the landlord divided up the restaurant into two retail storefronts. Space 194, a hybrid tea-coffee shop-gallery, is in the other half.

Chelsea Thai closes after 5 months on 1st Avenue
Posted by Grieve at 4:21 AM

Koko Wings is quite tasty if you like the Korean-style. If they maintain the UWS quality, this is a plus for the neighborhood.