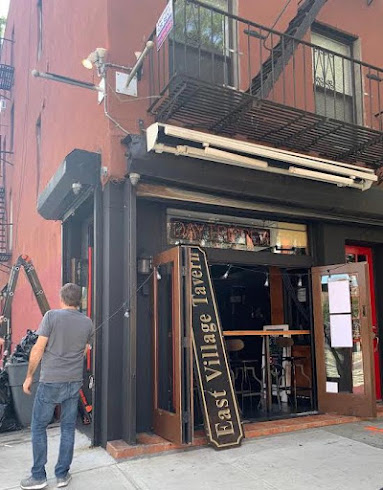 Last month, the bar changed ownership, and the space became DayTripper (Updated: multiple readers and sources have indicated the same owners are behind the new venture) ...

HEY GUYS!! In case you haven’t heard, East Village Tavern recently closed it’s doors. New management has taken over and opened DayTripper at the same address, and we suggest you check it out! DayTripper has beer pong, darts, foosball, a great happy hour and more! Follow @daytrippernyc SEE YOU THERE!! -your friends from EVT

East Village Tavern 2.0 opened as a Mexican restaurant and sports bar in July 2018.

The previous East Village Tavern closed in November 2016 after eight years in business. Bar management blamed a disagreement with landlord Steve Croman for the closure. (A Croman rep reportedly said that the owners were behind on rent.)

The name change coincides with CB3's denial of East Village Tavern's application to extend their hours to 4 a.m. and add karaoke, live music and DJs.

WHEREAS, given that Community Board 3 recommended the denial of this application in part because of the inexperience of the applicant and the concern that the business would not be operated as a tavern with a family-friendly menu as originally proposed by the applicant and given that, after six (6) months of operation, there is evidence that the business is being operated inconsistent from its stipulations by hosting events, unlimited drink specials and having its façade open past 9:00 P.M., inconsistent from its application in that has had five (5) televisions and a giant projection screen, inconsistent from its initial characterization of its business by having regular drink specials, unlimited drink specials and hosting beer pong, has sought alteration of its license without notice to Community Board 3 and has already generated complaints regarding noise from the business and from patrons in front of the business, Community Board 3 cannot now endorse the removal of the stipulations imposed upon the applicant by the SLA; now THEREFORE, BE IT RESOLVED that Community Board 3 recommends the denial of the application for an alteration of the full on-premises liquor license of St Vince Group LLC, doing business as East Village Tavern, in the premises located at 158 Avenue C, at the corner of East 10th Street and Avenue C, New York, New York, to wit removing all of the stipulations imposed by the SLA.


CB3 also noted that "the Facebook page of the business advertises regular drink specials which are so low in price that they may be illegal."

Interesting. You can't transfer a liquor license to new owners (or change the trade name) without approval of the State Liquor Authority, and I can't find anything online showing changes in the license for this location. So maybe "new management" means the same owners with a new idea?

Yet another refuge for frat boys, wooo

They also have giant TV screens, which means that I'm out.

Place died with Sandy was never the same the 2018 revival was a dismal failure menu changes constantly like a High School cafeteria, bartender turn over weekly never built a dedicated customer base. I am pretty sure owner have kept a small equity position thus no requirement to transfer liquor license. Day Tripper...they got the tripping part right!

What a stupid name.

In his 1970 "Lennon Remembers" interview, Lennon described "Day Tripper" as a "drug song". In 2004, McCartney said it was "about acid (LSD). In other words, it’s the perfect name for a place like this.