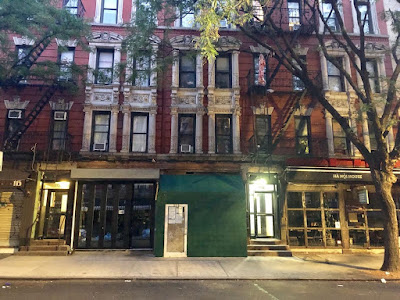 The Hanoi House empire is growing on St. Mark's Place here between Avenue A and First Avenue.

Work is underway now in the empty storefront — the former Five Tacos — at 119 St. Mark's Place, which is in-between the original Hanoi House and the Hanoi Soup Shop.

The space will serve as a bar-waiting area for people dining at the popular Vietnamese restaurant. As reported back in March, owners Sara Leveen and Ben Lowell appeared before Community Board 3 to license this address, which will feature an eight-seat bar and several tables for eating.

The CB3 notice stated the alteration here will also include a new entrance and host desk. According to their plan via the online questionnaire at CB3's website, the building's landlord will open the walls between the two spaces so that patrons can enter the restaurant from the waiting area. The landlord will then "create a new residential corridor on the west side of the expanded space."

Previously on EV Grieve:
Hanoi House expanding on St. Mark's Place
Posted by Grieve at 4:00 AM

Great news! My only complaint with Hanoi House are the lines and how cramped the space can feel sometimes. This will hopefully help. Other than that, the restaurant is top notch -- some of the best pho in the city for sure