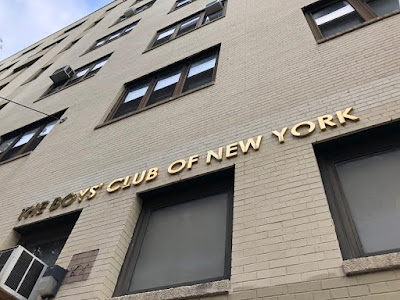 The Boys' Club of New York (BCNY) is prepping for one more school year at their Harriman Clubhouse on Avenue A at 10th Street.

In early August, news broke that Aaron Sosnick, an East Village resident and founder of the investment fund A.R.T. Advisors LLC, was the new owner of the Harriman Clubhouse, as Crain's first reported.

He bought the 7-story building for $31.725 million, and reportedly plans to sell the property, "potentially at a substantial loss," to a nonprofit that would maintain its civic use.

Lost in some of this transaction hoopla: What the Boys' Club was going to do for the near future in this neighborhood.

"We remain committed to serving our Harriman members and their families and, through an arrangement with the buyer, will stay in the building for another year. This will allow time for BCNY to secure a smaller permanent space in the neighborhood to provide programming."

The sale provides BCNY with the opportunity to continue many of its flagship afterschool programs — art, music, physical education, and academic enrichment — for its current members. Proceeds from the sale will also be used to expand BCNY’s services to neighborhoods in the Bronx and Brooklyn.

The Boys' Club quietly began the sales process in June 2018, as I first reported. Tosh said at the time that the sale of the East Village building would allow the organization the opportunity to start new programs in other neighborhoods in need of its services. (To be clear, the Boys' Club decided to sell their building — they were not forced out. The building was pitched for educational purposes as well as residential conversion.)

Meanwhile, according to the BCNY website, registration is open for both current and new BCNY members. The Harriman Clubhouse has also been hosting parent orientations in the past week.

RUMOR: The Boys' Club building on 10th and A has a new owner; will remain in use as a nonprofit
Posted by Grieve at 4:09 AM

Boy's club executives should be ashamed of themselves. and good on the local buyer, but shouldn't have to do that...

the real question is who profits from this?

they could have expanded their services and modernized with the least amount of disruption to everyone at the lowest cost to them - and preserved a valuable and historic neighborhood service.

the buyer would still have their tax break.

the neighborhood would not have to deal with years of construction of something we probably do not need.

The result of the BCNY selling their property and their ensuing plans is like a pretzel that turns back on itself. Why sell a building you own then rent a large space to continue your programs? What sense does it make outside of the profit from the building sale... And if they don't re-establish their program... it's too late to complain - they're gone.