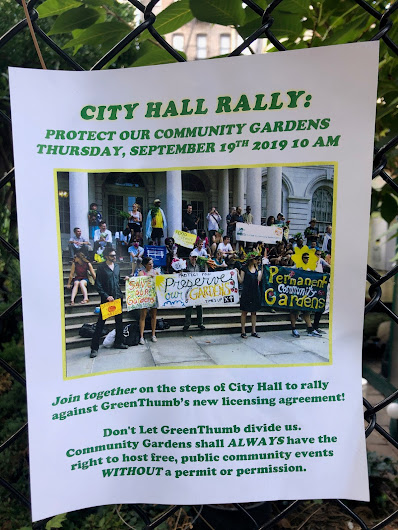 Community gardeners across NYC will rally at City Hall tomorrow (Thursday) morning as they continue to be at odds with the Parks Department over a new license agreement to operate their volunteer-run green spaces.

The gardeners had a similar action planned last month,
but called it off after city officials extended the deadline for submitting relicensing documents to Sept. 20. The city also said they would adopt several of the gardeners' recommendations.

Despite the extension and updates, Charles Krezell, head of Loisaida United Neighborhood Gardens (LUNGS), said that two sides are still at odds over several key points that he says are crucial to protecting community gardens and their stewards.

"The license negotiations are not going anywhere right now," Krenzell said in an email. "We met with Parks [officials] on Sept. 5 and they were not willing to concede anything new. We continue to ask gardens to not sign the license."

In April, community gardeners received a new four-year license agreement that they say substantially changes the relationship they've enjoyed with the city since 1978.

Krenzell yesterday outlined what he and other gardeners consider the main sticking points:

"Gardeners and other volunteers have to assume working at their own risk in the gardens, releasing the city from any possible liability issues. The public is supposedly covered by the city but none of this is spelled out. The license imposes requirements on gardens to clear city-owned sidewalks, which could be construed to leave gardens liable for any injury resulting from sidewalks obstructed by snow, ice, garbage and the like. Gardeners tend to voluntarily keep sidewalks clear out of consideration for their members and visitors, but should not be bound to perform garbage and snow removal. There are three set of rules and regulations that gardens are now required to follow. They are confusing and, in some cases, contradictory. The regulations are not enforceable with the current staff at GreenThumb, leading to arbitrary and selective enforcement."

"Each garden is required to hold two public events a year. The new rules now stipulate that the events must be approved in writing by the Parks Department — even though Parks has nothing to do with the events themselves. This takes away the spontaneous spirit of the gardens and requires more paperwork. We are also afraid it will lead to fees for permits down the line, as per the Parks Department regulations."

"Garden records can be can be audited at any time. There is very little money in most garden accounts and some are just kept in personal accounts. This is looked upon as a push toward making each garden group become a nonprofit, having to file tax forms and more paperwork."

Officials for the Parks Department have downplayed any garden drama.

"These renewals happen every four years and always have small changes based on experiences from the previous four year cycle — this cycle is no different," Crystal Howard, assistant commissioner for communications at the Parks Department, previously told amNY.

The Parks Department has told groups that they won't be permitted to continue operating without signing the new licensing agreement.

The rally starts tomorrow at 10 a.m.

Concern over new GreenThumb regulations for community gardens
Posted by Grieve at 4:30 AM

Money is kept in personal accounts and they are only required to have 2 public events per year. This is public property. This scam needs to end. Welcome to 2019. Open the books and open the gardens. And why are taxpayers liable? Absurd.

I agree the liabilty should be on the gardeners not the City - this is not insignificant, but the Parks has no place 'approving' public events. If public funds are being provided, they should be accounted for. But no doubt the City has a long term plan with the goal of rewarding the Rentiers of which we are not privy. THEY ALWAYS DO!

Community gardens and gardeners are a valuable resource, they should all be permanent, first of all, not potential development sites, as they are viewed by Mayor and law currently. Sad that local Bill LoSasso was recruited to head Greenthumb and now look at him

The gardens are being set up to fail with the new rules. Once they fail... the city will sell them off for housing. Thank Death-of-the-City de Blasio and ONE PARTY RULE. GOODBYE OPEN SPACE

"GOODBYE OPEN SPACE" - with the never ending scaffolding everywhere and so many of our parks being destroyed by "renovation" this does seem like the plan! Its probably seen as superfulous because the youngsters don't need open space, they are happy locked in a closet so long as they have their little cell phone.

Open space is best located in Montana. I do advocate for the larger organized and truly community managed gardens and the small sanctuary like ones as well. However many of these other gardens function as private backyards for select few on the block with keys. The modest version of Grammercy Park if you will... but remember this frontage was once tenements six story housing for more than a century before the blight rendered it rubble. It makes sense to slowly turn some of it back to housing sell to developers some lots take the proceeds and apply them to other lots for Senior Housing or low income housing. A nice fencing job done on 9th and C Garden!

As to the garden spaces being used as private backyards- all of the spaces are volunteer run and operated. These people have jobs and families, and other responsibilities in their lives. These volunteers spend their own money to keep the gardens beautiful and accessible to the public. All of the gardens are required to be open at set times during the calendar year. These hours are posted on all of the garden fences. So why don't you stop complaining and get involved with your local community and be an asset rather than sit back and wag your finger from your laptop?