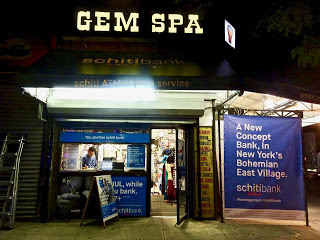 From noon to 2 p.m. today (Sept. 14!), the folks at #SaveNYC are hosting a Cash Mob at Gem Spa — currently adorned as a "Schitibank" branch — on Second Avenue at St. Mark's Place to help support the longtime business. Per the official invite:

Come prepared to spend some money — egg creams, pretzels, t-shirts, toothpaste! — and take your photo with a surprise work of guerrilla street art, as an acclaimed group of cultural activists and designers radically transform Gem Spa into a dystopian vision for the new St. Mark’s Place. 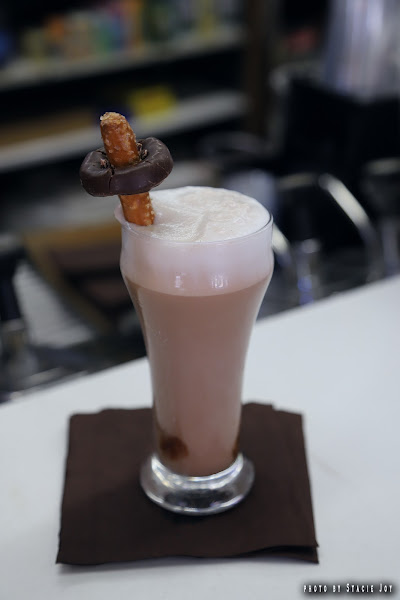 This is the latest act of kindness that neighbors have shown for the shop, which Parul Patel has been running for her ailing father Ray, the owner since 1986.

As we've been reporting in recent months, Gem Spa has been struggling of late, in part due to its temporary ban on selling cigarettes and lottery tickets as well as various landlord issues. (The ban ends in November.)

The story got a shout out on wnyc radio this AM!

So did they take Citibank up on making egg creams for the staff? For $$'s
That could help significantly with their financial woes.

So glad I attended this event today. Lots of people showed up. Love seeing people support an iconic neighborhood business.

I was really happy to take part in this; I have no idea who interviewed me, but I'm glad to support this iconic business any way I can.

Unfortunately Gemmy the kitty (looking under nourished) never experienced a great corner candy store compared to a run down lousy bodega. The mock up is fun, full of laughs, and great job. Let the "going out FOR business" issue move on to another ramen/bubble tea/coffee/... etc. It's done folks! What we really need is for Stage Restaurant to come back. Yes in our dreams too!