Get your Gem Spa t-shirts or photos of Madonna — at Gem Spa! 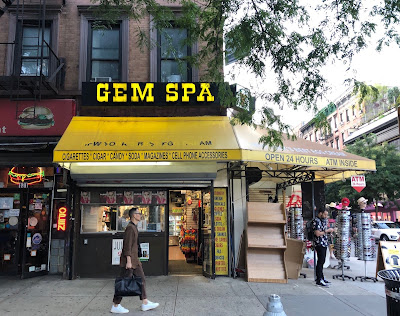 Starting this evening (Friday!), Gem Spa will have a limited supply of Gem Spa t-shirts for sale at the shop here on Second Avenue at St. Mark's Place.

In recent weeks, they've been filling orders for people who purchased them via PayPal. Now they'll have an extra supply on-hand. (The t-shirts come with a Kiehl’s lip balm that the company donated.)

As we've been reporting, the venerable shop has been struggling of late, in part due to its temporary ban on selling cigarettes and lottery tickets and various landlord issues.

Parul Patel, who is running the shop for her father Ray, the owner since 1986, decided to sell the t-shirts to help raise money for the shop. 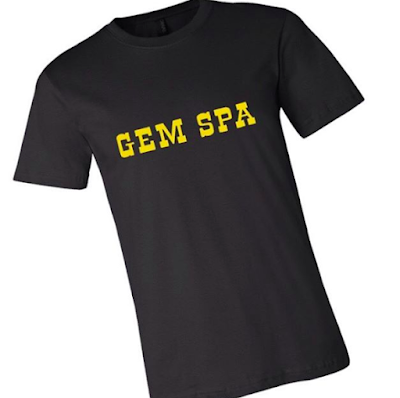 Meanwhile, longtime St. Mark's Place resident David Godlis is pitching in to assist the longtime corner shop. He's donating prints of this photo of Madonna outside Gem Spa in 1984 during filming of "Desperately Seeking Susan" ... you can order various sizes of the photo at Gem Spa...

Desperately Seeking GEM SPA. Once Upon a Time in the East Village, in 1984, Madonna was outside @besteggcream GEM SPA making history. But now this East Village landmark could be history - or worse, a Citibank - and needs some help. I’m giving them High Quality signed oversized postcards of this image in various sizes. Available for donations exclusively at GEM SPA. GO TO @besteggcream for details. All proceeds go to GEM SPA. GET A GEM SPA T-shirt too. Or stop in for an egg cream. Corner of St Marks & Second Ave. PASS THE WORD. 📷©️GODLIS

Previously on EV Grieve:
Will you buy a Gem Spa T-shirt?

What is happening at Gem Spa?

This is great, but I also hope they get their lottery/cigarette licenses back very soon!

This t-shirt would make for a great birthday present!

Hopefully this will tide them over. Cigarettes and lottery tickets are big business. The bigger point should be the fact that they lost these important revenue sources due to the city constantly harassing, fining, and over-regulating small businesses. Yet commercial rents are outrageous- but the city could stop seeing these businesses as a place to fine and more of a place to help and support.

Uhhh.. I don’t think that losing your license for selling cigarettes to underage smokers is “harassing, fining or over-regulating”. It’s simply illegal.

if the city were as aggressive with the bars, underage drinking, and rowdy drunks it might be less obvious that gem spa was targeted.
the morality police seem hell-bent on making tobacco their main villain.
let us not get into vaping, smoking and pot.

A 6-month ban on selling cigarettes AND lottery can cripple a small business.

And if I worked in one of these shops, I'm not sure that I'd be able to spot a well-faked ID, The city puts the onus entirely on the person behind the counter (who may not be trained to spot fakes, or who may just be filling in for a day or two). The city, as usual, rigs the game in its own favor.

I bought 2 and they're great! They've got all sizes and the shirts are good quality. I hope they remain a permanent item for the store.