Brooklyn's the Modern Chemist opening an outpost on East Houston 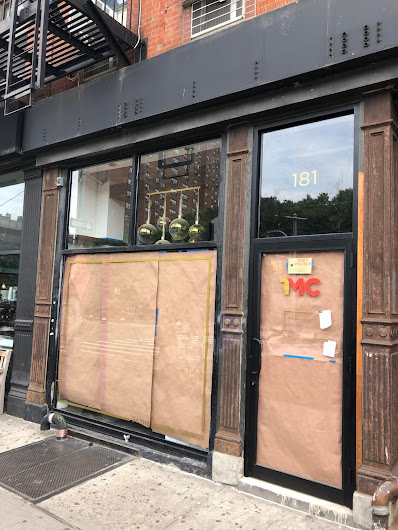 Work continues inside 181 E. Houston St., where TMC, "a non-pharmacy version of the Modern Chemist" in Brooklyn (as the Times put it back in April), is opening soon here between Orchard and Allen. The TMC initials arrived on the front door yesterday.

The Modern Chemist opened in Park Slope in 2010, and later expanded to Gowanus and Dumbo.

Per the Times, "the high-end shop sells drugstore goods like cosmetics and novelty items."

Unimpressed by faceless chains, founder and pharmacist Carlos Urriola opened the first location in Park Slope in 2010, which quickly became a staple in the neighborhood. A growing demand prompted the launch of a second location in Gowanus. As our stores have grown, so has our team, with the addition of pharmacist and partner Par Vora.

Fast-forward to 2017, our most exciting year yet! This third and largest outpost brings our unrivaled service to Dumbo’s residents, workers and visitors alike. In addition to traditional pharmacy services, we also provide a recharge station, gourmet food and coffee, curated selection of personal care and beauty products, wellness experts-in-residence and a relaxing outdoor space.

Speaking of faceless chains, the CVS on the corner of Houston and Orchard is still not open (despite signage, since covered, pointing to an Aug. 25 debut).

This TMC storefront, along with Dr. Smood next door, is the former American Apparel space that closed in October 2015.
Posted by Grieve at 4:01 AM

Email ThisBlogThis!Share to TwitterShare to FacebookShare to Pinterest
Labels: TMC

Sorry guys but I'll never betray my loyalty to Avalon Chemists on Houston & 2nd Ave for my pharmaceutical and beauty needs.

"Curated items of personal care?" Thanks, thanks. I'd rather pick these myself. That's kind of what "personal care" means.

"Novelty items" is usually a euphemism for, well, samo samo.

“novelty items” makes me think of Spencer’s Gifts... in every suburban mall of the 1980s