The Marshal has seized Savor Por Favor on 2nd Avenue 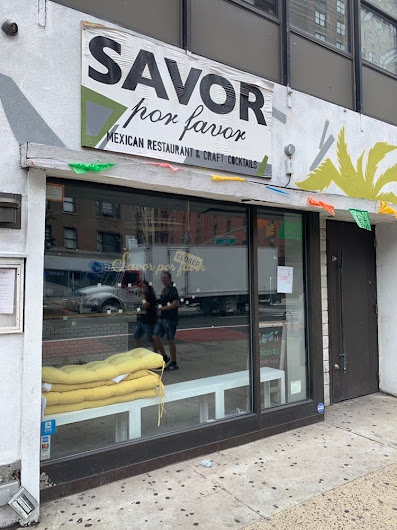 Another restaurant has not been able to make 157 Second Ave. work.

This past Thursday, the Marshal seized Savor Por Favor, putting the retail space here between Ninth Street and 10th Street back into the legal possession of the landlord. (Thanks to blog friend Nick Solares for the photos and tip!) 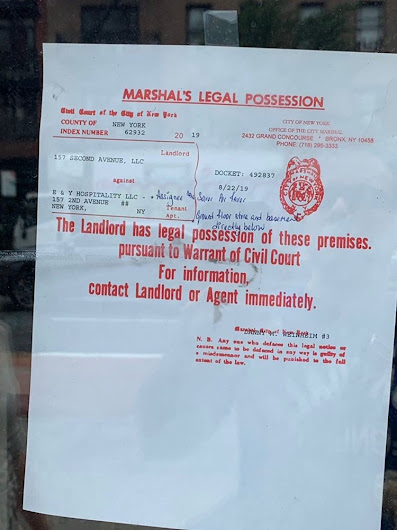 The Mexican restaurant-bar opened last October. If this closure turns out to be permanent, then they didn't last quite as long as the previous tenant, Yuan, which shut down in July 2018 after a year in business.

As noted in previous posts on No. 157, this has been a challenging space to make work for any length of time. Before Yuan, Biang! — the sit-down Chinese restaurant via Xi'an Famous Foods owner Jason Wang — closed in March 2017 after 15 months in business. The previous tenant, Wylie Dufresne's bistro Alder, called it quits after two-and-a-half years at the end of August 2015. Other recent restaurants here (before 2013) included Plum and Cafe Brama.

Also as noted before, if Wang and Dufresne, given their other successes, couldn't make the space work ... not sure who can.
Posted by Grieve at 4:17 AM

This has to be a joke. Any sane person with a pocket full of money should avoid this spot like the plague before signing a lease. Every business that decides to set up shop closes within months. And I wonder why? It's bro central on the weekends. Other than that, 2nd avenue is no longer a dining destination.

I guarantee that this would be a great location if someone would open a bar and call it The 14th Step.

This storefront is cursed.