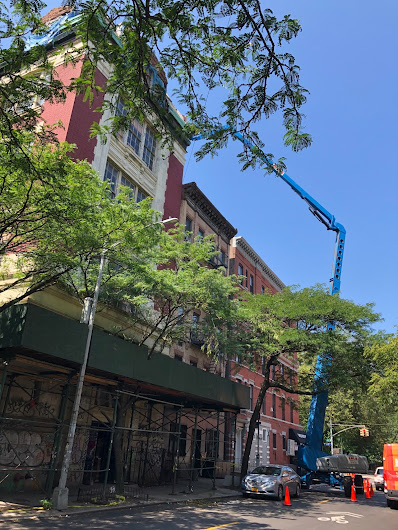 Work continues at the former P.S. 64 on 10th Street between Avenue B and Avenue C.

A reader shared these photos from yesterday, showing a crew working on the exterior facade on the western corner of the landmarked building... 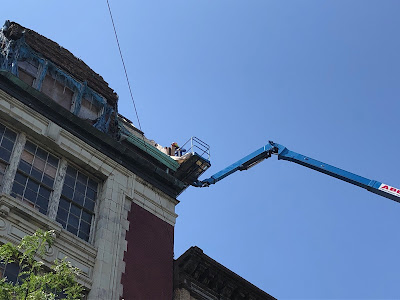 Another reader shared these photos... offering a rare glimpse inside the long-vacant property... 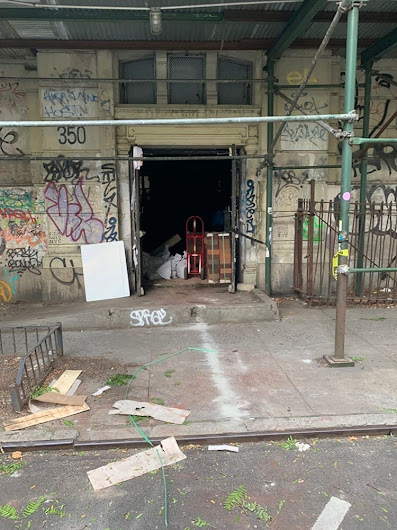 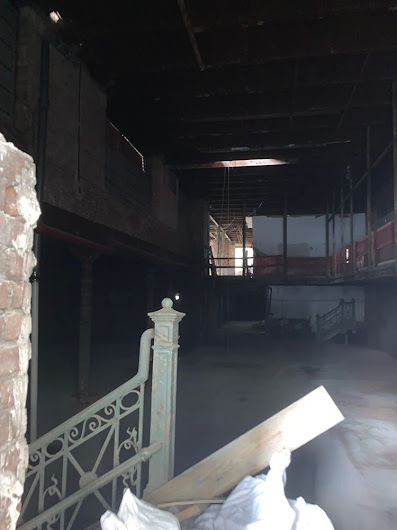 Workers at the scene offered that they'd be here for about 10 days to restore the building's corners to maintain their structural integrity.

On Feb. 6, the city evacuated adjacent buildings after discovering cracks at the old P.S 64 and CHARAS/El Bohio community center ... and later issued a Full Vacate Order.

City inspectors eventually determined that the building was safe, but did issue a violation to landlord Gregg Singer for failure to maintain the exterior facade, per Curbed.

Singer told Curbed at the time: "It’s all political. This is part of a concerted effort to put pressure on us. I was just at the building. There's definitely cracks — that we were already aware of — that will be pointed and repaired, but there’s no immediate danger."

Singer, who bought the property from the city during an auction in 1998, has wanted to turn the building into a dorm called University Square. The DOB continues to maintain a Stop Work Order — dating to August 2015 — on the building.

A DOB rep told The Wall Street Journal in January 2018 that the agency twice denied the developer’s application because he “failed to submit sufficient proof that the building would be used as a student dormitory."

Singer is in the midst of a lawsuit with the city.
Posted by Grieve at 4:14 AM

This is a crime the years of neglect if continued may result in the landmark building being demolished over safety. The condition of the sidewalks are abhorrent on both side streets making navigating them a risky event.
The city needs to take back the property from Mr. Singer and restore it as a school (middle school)the ability to assemble a property this size in Manhattan for a school even with eminent domain is expensive the money spent for the land can readily be spent restoring this classic structure.
The neighborhood has changed with young families moving in removing this eyesore and restoring it makes sense like the restoration of St Brigid church years ago. It will keep in place a part of the old village that so many grieve the loss of.

The city needs to take this back, by eminent domain or any other means. Singer is just going to let the building go to ruin for as long as he's alive.

Ditto- The city needs to take this back, by eminent domain or any other means. Unclear how much more time Singer has, he is burning the millions he borrowed three years ago from Amdiso Realty and there is no way he can repay it. If they do not foreclose on him and do the right thing, seize it.

If de Blasio really wanted to be president he'd totally seize that shit and make Singer cry. The good people of Iowa would doubtless reward such a display of unfuckery.

I was at a Town Hall down on Houston and D several years back, where DeBlahblahblah answered questions from the audience. He was asked about just this, and in front of an entire auditorium SWORE that the city was going to reclaim the building. Wonder how many seconds it took him after leaving to forget everything he said?

I worked here tirelessly with the members of CHARAS, El Bohio, Seven Loaves and many many neighborhood artists and community members who were there daily in the 1980s until we were forced out in the cold days of December, when Singer stole the building.
It is MORE THAN TIME for this extraordinary venue to return to the community, to become what it is meant to be: a place of learning, exploration, artistic and community programs and an OPEN SPACE for all. The recent "repairs" that are being done are only a last ditch effort for the current illegal owner to try again. We all know he lost so much money and time; and I believe his health has failed with this heavy burden. I pray for him to let go.