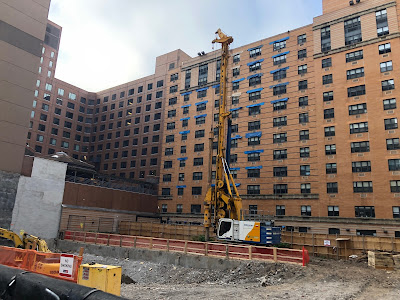 Work is in the early stages in the pit here on 14th Street at Irving Place ... at the future home of the Union Square Tech Training Center (aka tech hub).

The official renderings are now on the plywood... 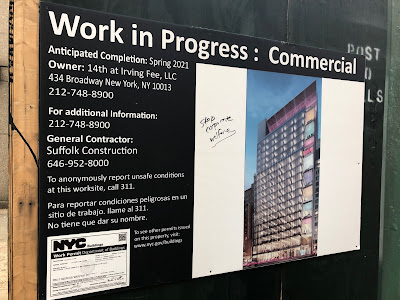 The project is being developed jointly by the city’s Economic Development Corp. and RAL Development Services. The Union Square Tech Training Center includes Civic Hall, which will offer digital skills for low-income residents, as well as market-rate retail, office space and a food hall.

The hub, championed by Mayor de Blasio and initially announced in early 2017, passed through the city’s Uniform Land Use Review Process earlier in 2018, capped off by a unanimous City Council vote — led by local Councilmember Carlina Rivera — in August 2018. A rezoning was required to build the the structure, which is larger than what current commercial zoning allows.

The approval came despite the pleas of some residents, activists, small-business owners and community groups who had long expressed concern that the rezoning necessary for the project would spur out-of-scale development on surrounding blocks.

And the renderings, which arrived last week, have already attracted commentary from someone who is unhappy about the finances of the project... 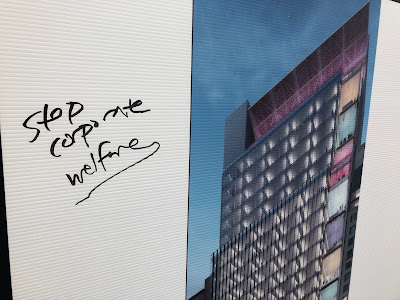 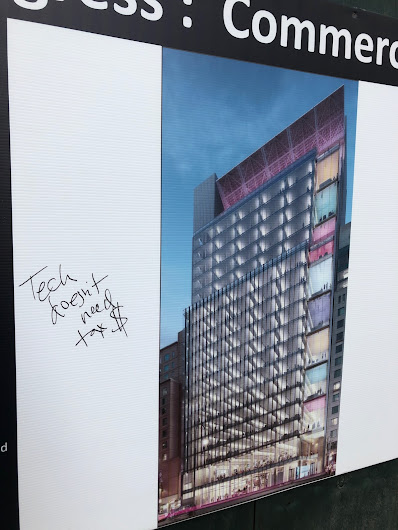 The new building, on the former site of a P.C. Richard & Son, now has a completion date for the spring of 2021, per the plywood rendering. The official groundbreaking occurred on Aug. 5.

P.C. Richard is gone on 14th Street; preservationists want answers about tech-hub commitments
Posted by Grieve at 4:05 AM

This morning 14th Street rush hour traffic was blocked in both directions for 10 minutes while a big rig with open flatbed piled high with I-beams tried to maneuver its way into the construction site. Meanwhile, plenty of people on my bus, which was only 50 feet away from the subway station entrance, fumed and cursed as they were made later and later. I can't imagine that's the only time it will happen.

Tech doesn't need tax dollars but without the arm of the State redistributing those tax dollars some low income people won't have the opportunity to learn technology and then contribute to the economy.

Tech could be taught at the Boys' Club and Girls' Club, and if they wanted to be good corporate citizens, Google could offer tech training (which would benefit them directly and indirectly). But no, somehow this one out-of-place "tech hub" is going to solve the WHOLE problem for the WHOLE city. Again, I have a spare bridge available at a nice price.

What percentage of this massive office building will be used for "the children"?

"Tech doesn't need tax dollars but without the arm of the State redistributing those tax dollars some low income people won't have the opportunity to learn technology and then contribute to the economy."

I predict within a couple of years of the opening the programs designed young people in the neighborhood will be shifted to somewhere else like the Bronx thus freeing up market rate office space for the developer to lease.

You can see all the as of right proposals for this lucrative publicly owned space, including the original RAL/Suffolk (donors to the Mayor) proposal that had more "community" space and zero 100% market-rate office space in the "Picking Favorites:The 14th Street Tech Hub" report here: