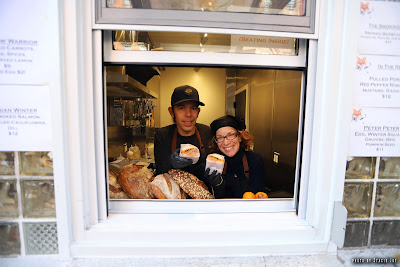 And for his latest review at the Times, Pete Wells pays a visit... and he liked what he found.

Lately I have fallen under the spell of an East Village restaurant called Foxface. The cooking there is hard to pin down, geographically. Stopping in a few weeks ago, I ate Low Countryish wild red shrimp on grits, with sweet corn off the cob and a potent saffron-lobster sauce. More recently, I had skinless pork sausage inspired by sai ua, the spicy and tangy specialty identified with the northern Thai city of Chiang Mai. The soft tripe I enjoyed the other weekend had been simmered with ’nduja, the fiery and malleable Calabrian sausage, and then covered with a few thin shingles of shaved pecorino.

He also describes the unique (and small!) work environment in which Kushnir and Lahat create their sandwiches...

Like the fox in the logo, Ms. Lahat has coppery hair and wears cat’s-eye glasses. She prepares the orders in the room behind the window, which measures 48 square feet. Inside the building, under the stairs, Foxface has a second room. Mr. Kushnir thinks it could be as large as 14 square feet.

A variety of equipment is stowed in the two rooms, including three induction burners, a roaster, a smoker and a dishwasher. After business hours, some of it comes out as Mr. Kushnir supervises the more time-consuming roasts and stews. He describes the food that he and Ms. Lahat cook as “dishes we like to eat, reimagined as sandwiches.”


In the end, the review reads a lot more positively than you might think for one star (it is a NYT Critic's Pick).

Meanwhile, read our Q-and-A with the owners at the link below...

Yes it is intriguing, imaginative, cute, and delicious!!!
The customer service has always been joyful.

I'm glad they'll get the exposure a NY Times review will provide!

I could read Pete Wells writing about food all day. The prose!

I would brave the lines if only they had anything vegan. #toomuchtoask

kudos and congratulations to them, I bet business will be BOOMING today! Talk about making the most of a tiny space -- true NYC ingenuity, and the sandwiches are phenomenal to boot!

Part of me would love to see them expand. Another (bigger) part doesn't want to see anything change.