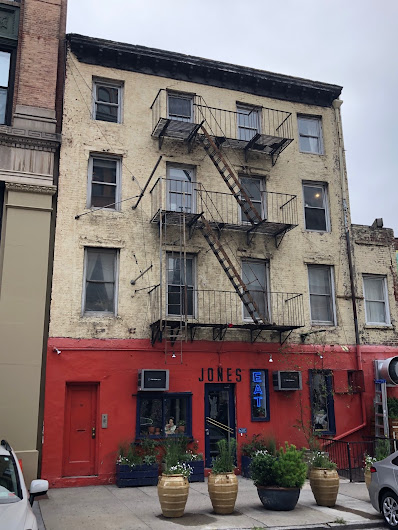 Here's a look at how The Jones is shaping up at 54 Great Jones St. between the Bowery and Lafayette at the former Great Jones Cafe space... 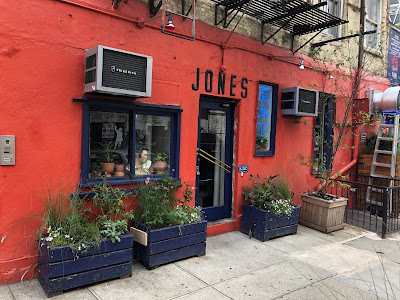 The familiar Jones lettering is above the door ... along with the original neon EAT sign in the window... even the bust of Elvis is back, though in a different window ... 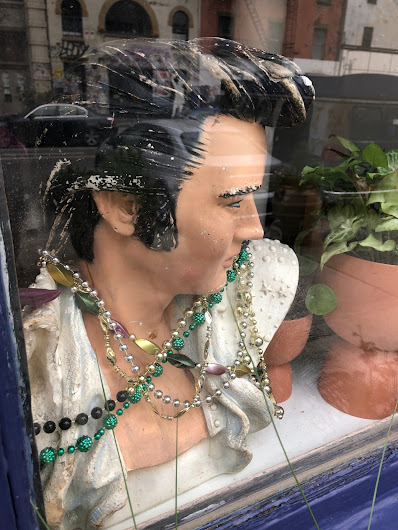 As previously reported, restaurateur Gabriel Stulman is behind The Jones, described as "an all-day bustling cafe and neighborhood joint with a focus on light, fresh and bright menu." (This Instagram post from Stulman explains the how he came up with the name.)

No word on the menu just yet. The opening is expected soon. 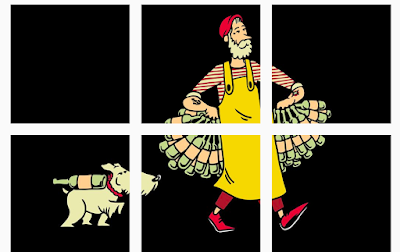 Dynamic duo. Meet Jones and his pup Baxter: charming, witty and wildly entertaining, this best friend pair is the life of any party.

Baxter is a debonair, well-traveled “Renaissance mutt,” and Jones, a fisherman, is his trusty sidekick.

Follow along to see what adventures these two get into at The Jones and beyond. #jonesing

Great Jones Cafe never reopened after Jim Moffett, the longtime owner, died in July 2018 at age 59. The Cafe, a popular yet low-key spot, first arrived in 1983.

The Jones is now open.

Grub Street has a preview.

It’s more similar in size and scope to his West Village establishments. Like Joseph Leonard, it opens early (at 7:30 a.m.), and once dinner service starts next month, it will close a little after midnight. Like Jeffrey’s Grocery, there’s a raw bar. And like Fairfax, it has a café vibe with small meals — a cheffed-up Filet-O-Fish, shaved-summer-squash salads, tinned sardines served with a hunk of baguette, egg sandwiches, artful pastries, fresh-baked bread, third-wave coffee — and a handful of main dishes.

Stulman also acknowledges that the Jones is, in a way, like his restaurant Fedora, a decades-old neighborhood haunt transformed by him into a sleek destination for the upwardly mobile, much to the consternation of critics like Vanishing New York’s Jeremiah Moss. Stulman’s rebuttal is that “New York is always changing, and each generation should do their own thing.”

[Updated] The future of the former Great Jones Cafe
Posted by Grieve at 4:01 AM

This really is fauxstalgia. I mean, "light, bright, and fresh" are not the words I'd associate with the real Great Jones Cafe. That hefty dish of mac-n-cheese was a delicious, delicious brick in your belly.

Also not into cutesy fake retro cartoon characters, or the words "debonair" and "Renaissance" applied to, you know, DOGS.

Not gonna lie, it is nice to see Elvis again. Which means I will be SUPER-sad if my memories of him there are tainted by long bellowing shrieking tottering lines of Solo cup-type invaders.

This is called a Hollywood restaurant - all facade. Fake. Everything is manufactured. The atmosphere... the food. Good luck with that.