No winners yet in Tompkins Square Park synthetic turf battle 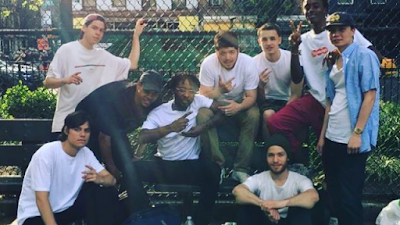 The New York Times finally checks in on a story that we (and other outlets) have been following these past two months — the city's desire to place a synthetic turf on the concrete courtyard (aka TF) in Tompkins Square Park.

As we reported on July 2, the city has plans — apparently only known to residents who may have attended a Community Board committee meeting in May — to cover the multipurpose courts in the northwest corner of Tompkins Square Park with synthetic turf, a move that surprised and upset a major user of that space for 30-plus years —skateboarders.

The turf project, happening at several area parks, is a result of the city's flood-protection plan that will close East River Park next March for 3.5-plus years. The city needs to find space for the sports teams and youth leagues who use the fields along East River Park.

And now, to the Times (find the full article here):

“We don’t have anything against asphalt,” said Liam Kavanagh, the Parks Department’s first deputy commissioner. “There’s always going to be need for asphalt spaces in our system. But when you have a situation where you are balancing literally thousands of hours of permitted youth sports that don’t have a place to go, we have to prioritize youth sports.”

The Parks Department prioritizes the permitted sports, Mr. Kavanagh said, because of the amount of time groups like the Little League spend organizing and raising funds from the private sector for this “real New York City tradition.”

The skateboarders said they cannot skate on artificial turf. Sidewalks and streets are legal to skate on, they added, but not necessarily safe for themselves or pedestrians.

Tompkins Square Park, which reopened in 1992 after large-scale renovations, appeals to the skateboarders because of its lack of ramps and handrails. Rookies can feel intimidated in skate areas with obstacles, they said. The park’s flat surface enables all users to learn from one another.

Last month, reps for the skateboarders met with the Parks Department. Both sides have reported that it was a productive meeting. The department has since said it has made no decision on when — or if — it would install the turf.

You can find the petition — titled "Save Tompkins Square asphalt!" — here. As of last evening, there were nearly 31,000 signatures.

EV resident Adam Zhu, 22, who started the petition told this to the Times: "There is something important about this specific spot, and that has to do with the history of the park at large and our personal history with the park — having grown up here, met all our friends here.

"I’m not fighting to make this a skate park,” he added. “It’s a multiuse park, and it functions very well as is."

Previously on EV Grieve:
Skateboarders upset over plan to add synthetic turf to the northwest corner of Tompkins Square Park
Posted by Grieve at 4:25 AM

When the time comes... there will be a showdown... mark my word... And the EV and it's supporters will need to organize a FLASH MOB to OCCUPY THE ASPHALT to stop the destruction of TSP by the hands of Death-of-the-City-de Blasio and Ruin-The-EV-Rivera.

Skateboarding is now an Olympic sport. Maybe the city should be encouraging skateboarding?

Maybe they could turf over a couple car parking lots for broader community use and youth ballgames. Or turn a few residential blocks into soccer fields. Imagine the possibilities!