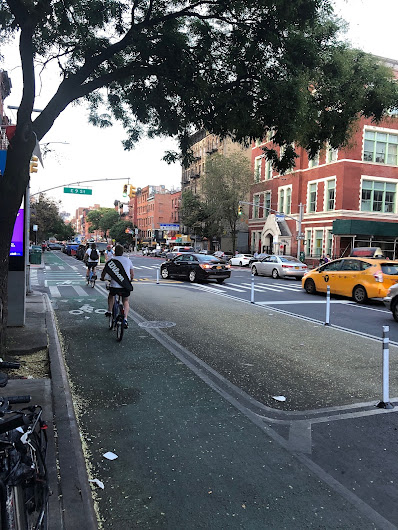 The city has finally finalized the offset crossings on several intersections along the First Avenue and Second Avenue bike lanes. (The markings had been in place; the plastic pylons arrived this week.)

News of the offset crossings was first announced on May 21. This after the city resurfaced First Avenue and repainted the bike lane.

As Streetsblog reported in May, the arrival of offset crossings in the East Village comes two years after the driver of a box truck reportedly made an illegal left turn turn — across multiple lanes of traffic on First Avenue at Ninth Street — and slammed into cyclist Kelly Hurley, who later died from her injuries.

Other offset crossings with newly added pylons include on First Avenue at Seventh Street... 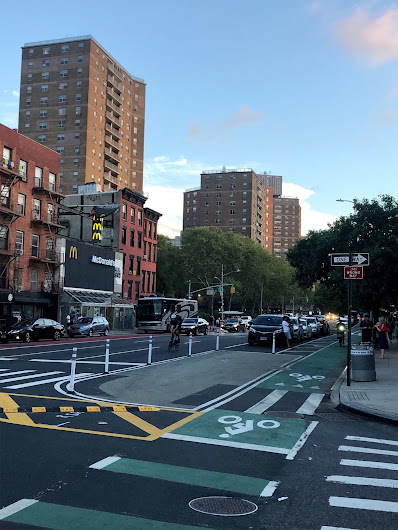 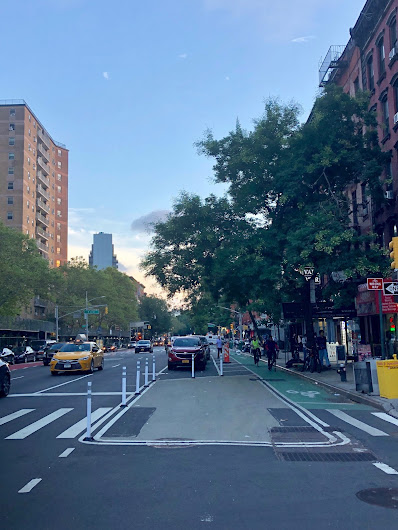 Quoting Streetsblog from earlier this week: "Last year in New York City, car drivers caused more than 225,000 crashes, resulting in injuries to more than 60,000 people — and the deaths of 10 cyclists, 120 pedestrians and 96 motorists." So far in 2019, 19 cyclists have been killed by cars or trucks on city streets.
Posted by Grieve at 4:55 AM

"... and Fourth Street, where motorists can't even make a (legal) right turn..."

It is not just to offset the crossing of vehicles but also to provide more space for people to cross the street on foot ("pedestrians") and to shorten the crossing distance. This design of course does not give a person on foot any protection from moving vehicles the same way a concrete pedestrian island gives (like on the south west corner of St Marks Pl, 10th st and 12th streets).
Second Avenue is the same thing: the city installed pedestrian islands which give people a false sense of safety where they stand next to moving traffic and "protected" by plastic pylons.

Right now, Amanda Burden-Christ is sending de Blahz a thank you basket full of spliffs, as her Astor Place moonscape is no longer the City's most asinine piece of urban planning. By the time the electric scooters hit the streets, there won't be any streets left.

"According to the Department of Transportation's annual mobility report, citywide bus speeds are at their lowest in a decade (7.58 mph), while annual For-Hire Vehicle trips have exploded to nearly 316 million, a 90 percent increase since 2010. Taxi speeds in Manhattan below 60th Street (the "Central Business District") have slowed from 9 mph to 7 mph over the last eight years, despite a slight decrease in the number of cars that enter Lower Manhattan every weekday. Traffic speeds are down to 4.9 mph in what DOT refers to as the "Midtown Core," AKA the Tourist Hellscape of Times Square, Broadway, Herald Square, etc.

In fact, taking a Citi Bike is one minute faster than taking a car anywhere within the Midtown Core, according to the DOT."

As a cyclist I do think these help some. Idiots are still going to turn across lanes or not always look before turning but these at least force drivers to not cut corners so you're able to avoid drivers a bit better. If only the city would actually actively enforce both driving and cycling laws at some of the more dangerous intersections and then we'd all be safer.

it would be great of the city paved the rollercoaster ride first and second avenues have become. it i really dangerous.
you can mix a milkshake or scramble an egg riding up or down these avenues.
i expect a vehicle to fall through the road soon.

I was going back to rewrite that line about 4th Street ... I cut it and got distracted before I finished the thought... in case you were wondering what happened to it!

And yes to the concrete pedestrian islands for the safety of all...

@blueglass Good news! I stepped over Mayor de Blahz in the mens room at Tompkins Square Park where he often naps, and he told me there are roller coasters planned for all of the cross streets and - you'd better sit down for this. All vehicles must be retro fitted inside a new contraption that he described as part carnival Wall of Death and part giant hamster ball. Finally, my dreams of living inside of a theme park inside of a pinball machine have come true!

"Citi Bike is one minute faster "

"they" know that because every ride is tracked alongside the rider's personal data. "they" track when you left the port and when you docked it. "They" track the associated cell phone with the rider. "They" track the credit card usage against the cell phone. "They" do levels of association analysis against it to see who is associating.

Of course a Citi Bike is 1 minute faster. The cyclists go through red lights, they go up the down Aves and down the up Aves. They ride on sidewalks. Hell, if a car could do that... Hey why not a bus?! WHAT A JOKE!

All this crap on the street isn't going to change the behavior of oblivious cabbies/truckers and entitled cyclists, and every few years (months it sometimes seems like), there's extensive water/gas/other underground work and all these fancy street accessories are for naught.

The previous left turn lanes were a safer way for a driver to evaluate the bike lane in front of / behind them; in addition to decreased bike lane visibility, the strange turning angle that these offsets require can cause a vehicle's A-pillar to obscure the driver's view of the crosswalk. I hate to make such a prediction, but my belief is that these offsets will increase pedestrian/cyclist injuries/fatalities, not lower them.

The street speed bumps are a bit weird when you hit them without looking for them - as I did - but they should improve the intersections for pedestrians and cyclists alike.

Citibikes are great for commuting around Manhattan which I've been doing since uh Abe Beame. As someone on Ave B with clients in Tribeca and Chelsea I can attest they are somewhat cough faster than walking.

Agree with @3:32 also. Put in 14th st and 1st ave intersection style delayed lights, which give preference to pedestrians/cyclists first and then motorists, or else go back to the mixing zones, except put in the skinny white traffic pylons to separate the bike lanes from the vehicle lanes. The newest configurations are retarded and less safe for cyclists, based on the reckless/confused/erratic behavior that I've seen with the motorists trying to navigate them.

Yeah, I'm an entitled cyclist because I want to live.
I feel safer without the "mixing zones". I believe I am safer. How is this not a good thing, neighbor?

Those speed bumps are very odd. Both the placement and angle seem to serve no purpose other than to cause
cyclists and pedestrians to slip and fall, especially when they are wet or hidden by snow.

The pylons are a good idea but they regularly need to be replaced since cars and trucks run over them so frequently. If they were mad of steel or concrete at least drivers would pay a price for driving outside of their lanes.

The bottom line is that until all vehicles become lself-driving, including bikes, scooters, uni-wheels and skateboards, and everyone including pedestrians obeys traffic laws, accidents will continue to rise. There are just too many people racing up and down every street these days for any of these bandaid fixes to make a real difference.