The totem of Broadway 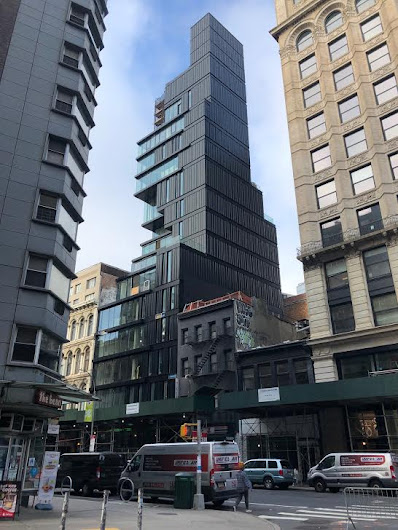 EVG reader Doug pointed out that workers recently removed the construction netting from the all-new 809 Broadway between 11th Street and 12th Street.

The building — 10 floors stacked on top of the previous five-story structure — will house 10 luxury condos, including a triplex penthouse on the top floors.

Situated on a diagonal segment off Broadway, Lot 809 stands like a totem indicating the visual entrance to Union Square. The neighborhood’s characteristic street scape is extended to the building’s façade by stacking and shifting the floor plates, thereby creating enlarged spaces, and protected outdoor terraces. 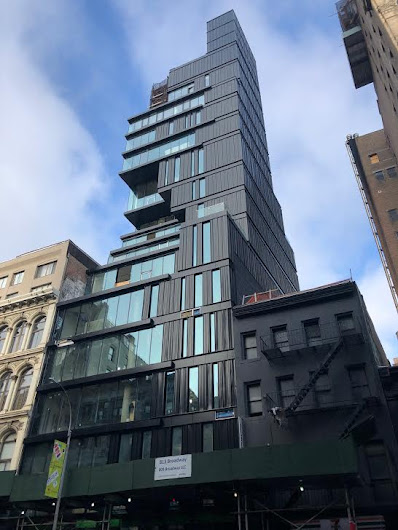 This address was once the longtime home — until 2013 — to Blatt Billiards, a pool table manufacturer that had owned and occupied the building since 1972.

Email ThisBlogThis!Share to TwitterShare to FacebookShare to Pinterest
Labels: 809 Broadway

The signs go up today on all 4 sides: YOU WILL NEVER LIVE HERE!

They see a "totem indicating the visual entrance to Union Square". I see a giant middle finger extended to the entire neighborhood.

This is definitely a fuck-you to everyone in the neighborhood. It looks like it was designed by a bunch of architect school drop-outs in a competition for "ugliest place you can imagine".

So they basically copied the design from the picture on the Jenga box and called it a totem? A totem is a sacred object; this is just an oversized version of a child’s toy.