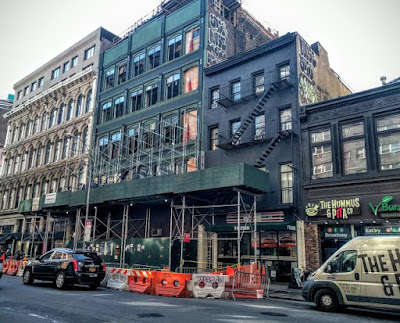 At 809 Broadway, where workers are adding a 10-story addition to the former Blatt Billiards building, a "concrete blowout" during construction on March 11 has caused "extensive damage" to the adjacent property where residents have been forced from their homes, according to city records. 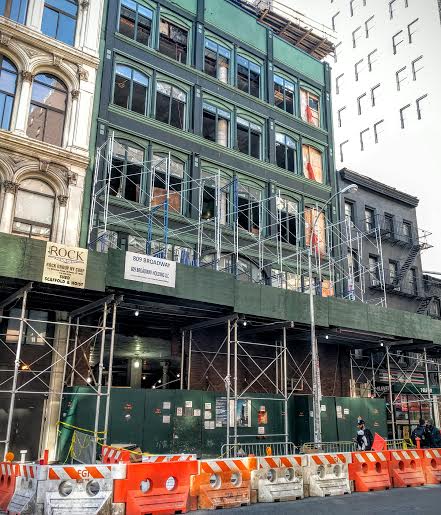 According to the DOB, there are four Stop Work Order complaints for 809 Broadway, including one for "work does not conform to approved construction documents." 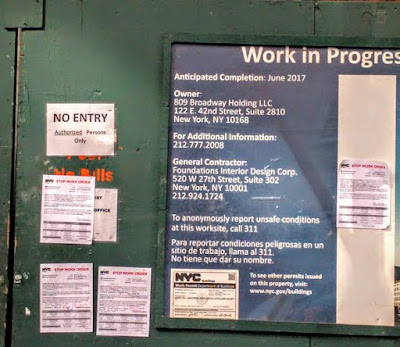 Next door, at this building between East 11th Street and East 12th Street, a a Partial Vacate Order remains in effect. Residents have not been allowed back into the building since the construction accident. (City documents show that contractors were admitted inside to remove personal effects for the tenants.) In addition, the 7-Eleven on the ground floor remains closed. 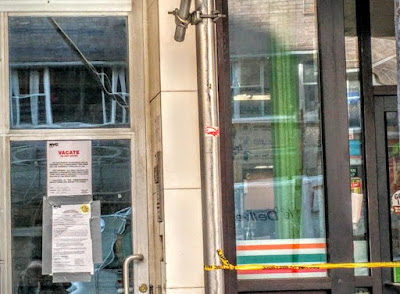 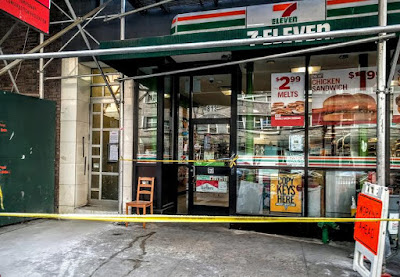 Property records show that Ben Shaoul's Magnum Real Estate is the owner of the damaged 813 Broadway, where the rentals feature four and five bedrooms that range in price from $7,000 to $10,000 a month, via Streeteasy listings.

A neighbor says that residents at 813 won't likely be able to return for at least two more weeks.

809 Broadway was the longtime home until 2013 to Blatt Billiards, a pool table manufacturer that had owned and occupied the building since 1972. Blatt principals Ronald Blatt and Bruce Roeder reportedly sold the building to a buyer who was identified only as 809 Broadway Holding LLC.

The Commercial Observer noted last July that 809 Broadway Holding LLC "is a partnership of three private investors led by its principal Ariel Rom." New York-based IDM Capital is the project's development manager, per the Observer.

There are approved permits on file to boost the height of the 55-foot building to 199 feet, adding 10 stories to the existing five-story structure. In total, the building will house 10 luxury condos, including one duplex and one triplex penthouse on the top floors.

Here are renderings via ODA-Architecture... 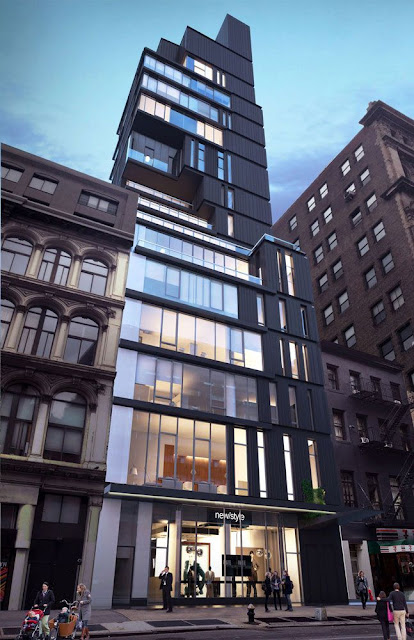 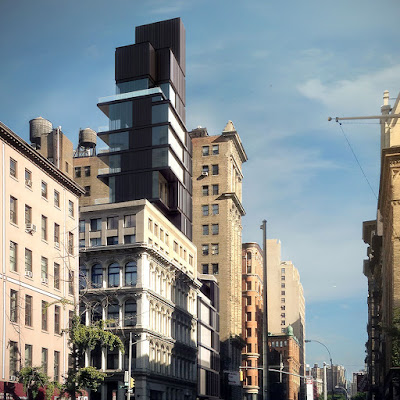 The construction incident at 809 Broadway sounds similar to what occurred in 2012 at 133 Third Ave., where workers accidentally sent wet concrete oozing through a wall and into an the NYU dorm next door on East 14th Street. The owner of the building that NYU leases the dorm from subsequently sued to halt the project. The 16-story residential building has remained dormant since the accident. Recently approved amendments to work permits suggest that constructions will resume again here.

Thank you to EVG reader Mitchell Schneider for the tip and photos
Posted by Grieve at 4:30 AM

The rendering of the new building is typical of the god awful that stick out like a sore thumb to the surrounding structures.

That is one ugly building.

Every aspect of this is nothing short of despicable.

The word "hideous" comes to mind. Maybe it will look better in person. Or when you are inside.

Apparently greed is in a big hurry and leaves nothing but destruction in its path.

@anon 7:22, I just used "hideous" to describe it too. This building is the physical manifestation of developer greed.

So, even if you're a rich type who can afford an expensive rental in NYC, you can still be screwed over during this boom in idiotic construction. And is Ben Shaoul helping them out? I bet not.

Maybe that's what we need as a tipping point: When you fuck over the 1%!

This building looks stupid and incongruous to the surrounding area.

I don't think this building is ugly or "hideous" it is just hideous at this location and it is tragic a cast iron building has been destroyed yet another luxury building.

Pretty soon we aren't going to have discernible neighborhoods. The whole island is going to become a tribute to junky looking jenga puzzles and sky scraping glass needle dicks.

That is one ugly building. Complete insensitivity to neighborhood scale and fabric. Amateurish. It's like a big middle finger to the neighborhood.