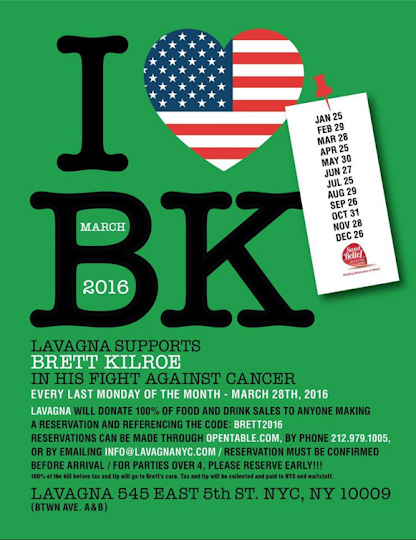 East Village resident Brett Kilroe was diagnosed with Stage IV colorectal cancer in 2011. According to his friends, he was denied coverage from insurance because it was considered to be a pre-existing condition.

Donations have helped Kilroe, an art director who has worked with Kings of Leon, the Strokes and Alabama Shakes, get the care he needs. However, his ongoing treatment continues. (According to the Kings of Leon Facebook page, the cancer has spread to Kilroe's skull, "which is relatively good news because it didn’t spread to his brain, and doctors believe it can be treated with targeted radiation.")

Throughout 2016, Lavagna, the excellent Italian restaurant at 545 E. Fifth St. between Avenue A and Avenue B, is helping with Kilroe's expenses.

On the last Monday of every month, Lavagna will donate 100 percent of the food and drink sales (before tax and tip) to anyone making a reservation and referencing the code Brett2016.

You can read more about Kilroe via SweetRelief.org.
Posted by Grieve at 4:10 AM

Email ThisBlogThis!Share to TwitterShare to FacebookShare to Pinterest
Labels: Lavagna

There is also an effort to help Ivan Julian from the Voidoids with expenses from his illness.

I thought obamacare was supposed to resolve this shit.

According to his friends, he was denied coverage from insurance because it was considered to be a pre-existing condition.

This makes no sense. The only part of Obamacare that everyone, even Republicans, agrees on is that insurance companies cannot deny coverage based on pre-existing medical conditions.

Obamacare should be renamed ocommiescare.

...if you read the article (linked) carefully, it explains his current situation... he has some coverage, just not complete, and work is an issue for him. Wishing him luck. It's great that the restaurant is trying to help!

BTW, there are also concerts at City Winery to help Ivan Julian. May 4 is sold out (tenacious wait listing yielded 2 tix for moi) and word is there is a second show being added on May 7 -- not up on the CW website as yet.

It takes a village to help a friend in need!

Obama insurance f$%^ery. I know people getting neck surgeries and physical therapy for months all paid for. And others still shafted and saddled with ER and other "non coverage" bills they can't afford. Casino-care.

Will donate a few quid and go to Lavagna. Thanks for posting.

Looks like he was initially denied insurance coverage before the ACA went into effect.

Please educate us how the ACA is "communist" or even "socialist."

Be specific and use the correct definition of each of these two terms.

The State is an institution that arrogates a monopoly of force over an arbitrarily circumscribed geographical area, and which obtains the resources it uses by theft. Communism and socialism are just dumbocracy taken to its logical conclusion.
The criminals who brought the ACA did it by theft and lying. Bama is a dictator in the making, as were his predecessors. (Lincoln, Prof. Wilson, and FDR were actual dictators.)
Uncle Joe Stalin would have loved the ACA.

Pols are criminals and commies.
After Joe Kennedy got rich under prohibition, did any of the Kennedys ever make a dime that wasn't stolen from a taxpayer? Didn't think so.

Where to begin on this 6th grade level Tea Bagger/Ayn Rand/Rand Paul/Ron Paul/Liz Mair/Nick Gillespie/Reason Magazine tirade? Funny how this so called "libertarian” conveniently leaves out the biggest dictators in modern times-Richard Nixon, Ronald Reagan, both Bushes, and Dick Cheney. Because behind the facade of a so called libertarian is just another corporate shill/die hard/"Southern Strategy" Republican. BTW, I have almost 30 years of Benefits/HR experience and your knowledge of health plans and insurance in general, (just like Alito) never mind the ACA, is laughable.

Joe Kennedy being a scum bag? Wow, stop the presses. Hey clueless, you forgot LBJ in your dictator list. As per his tailor advise:

“The crotch down where your nuts hang is always a little too tight, so when you make ‘em up, give me an inch so I can take ‘em out there because they cut me, it’s like riding a wire fence.”

"But, uh when I gain a little weight they cut me under there. So, leave me , you never do have much of margin there. See if you can't leave me an inch from where the zipper (burps) ends, round, under my, back to my bunghole, so I can let it out there if I need to."

Re this: “According to his friends, he was denied coverage from insurance because it was considered to be a pre-existing condition.”

Even prior to the ACA, health care plans based in NYS, as per NYS law, could not deny coverage due to preexisting conditions.

I like Lavagna and will happily support this. Thank you Lavagna, and be well, Brett!