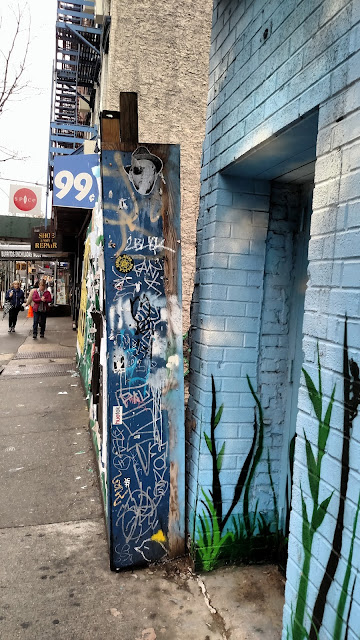 An EVG reader shares the following about the plywood at the empty pit also known as 75 First Ave.:

I feel like this barrier on between Fourth Street and Fifth Street is going to collapse and flatten a child or small dog or old lady any moment now.

It even has crap leaning on it from the opposite side. 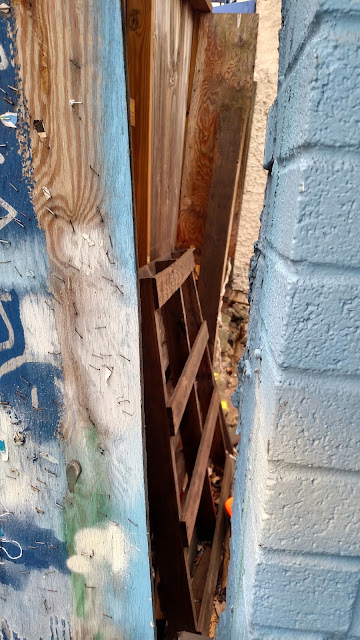 There is a complaint on file with the DOB from last October about the plywood, with the caller noting the fence "is in danger of collapsing." However, an inspector checked it out and said "site safe and secure." (The plywood did fall down during Sandy and Irene.)

Anyway, this reader query prompted us to take a look at this lot adjacent to Rite Aid. The space has been empty for years. There have been several variations of residential buildings in the works, but nothing ever materialized after nearly 11 years of efforts.

Last fall, Ozymandius Realty and Orange Management sold the property to the Colonnade Group for $12.9 million, as The Real Deal reported.

Now, here is info on what the Colonnade Group has planned for the lot via their website:

This striking cantilivered ground-up structure is located in the heart of the East Village, one of most exciting and vibrant neighborhoods.

Designed by HTO-Architect, the building will rise 8 stories and will stand out with its contemporary and timeless glassy structure. Comprised of 22 residential units, ranging from 1 to 3 bedroom condominiums, 75 I˚ AVE is the ultimate destination for New York sophisticated buyers looking for all the comforts of a high-end residence in a young and dynamic environment.

All of the units will benefit from a number of amenities, including Fitness Center, Lounge and Library, Private and Common Roof Deck, Storage, Bike Storage & Doorman.

Construction is anticipated to start at the beginning of 2016 and estimated completion is Fall 2017.

We didn't spot any full renderings of the project... but the Colonnade website had this tease of an image... 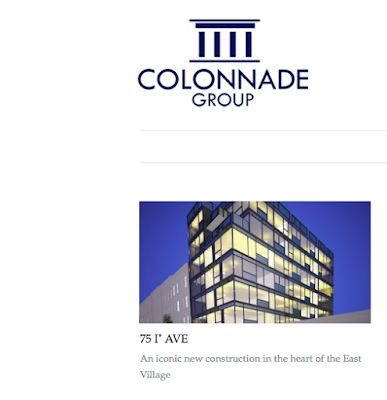 Also, a familiar name will be involved...

To clarify @trdny 's article, our 75 1st Avenue development will host 22 units and no retail. @RyanSerhant will handle sales and marketing

Does no one else think the name Ozymandius Realty a little ironic?
---------------
I MET a traveller from an antique land
Who said:—Two vast and trunkless legs of stone
Stand in the desert. Near them on the sand,
Half sunk, a shatter'd visage lies, whose frown
And wrinkled lip and sneer of cold command
Tell that its sculptor well those passions read
Which yet survive, stamp'd on these lifeless things,
The hand that mock'd them and the heart that fed.
And on the pedestal these words appear:
"My name is Ozymandias, king of kings:
Look on my works, ye mighty, and despair!"
Nothing beside remains: round the decay
Of that colossal wreck, boundless and bare,
The lone and level sands stretch far away.
--------------

And, yes, I realize it is a personal name that some people get named; it is just the context of real estate vs the image in that poem in a place with the Brit/Euro cultural inheritance hegemony thing going on.

"...the (cantilevered) building will rise 8 stories and will stand out with its contemporary and timeless glassy structure..." - reality check: the building will tower over its smaller, humbler neighbors; the fact that it is cantilevered simply means it will resemble a pile of blocks flung atop one another by a peevish baby; and rather than "standing out", it will simply resemble every other pile of barren glass and steel crap being foisted on the neighborhood. (Translation courtesy of Gojira.) The pyramids of ancient Egypt are timeless. The Coliseum in Rome is timeless. Notre Dame cathedral is timeless. This excrescence? Don't make me laugh. And who wants to take bets on how much time the inhabitants will be spending in that "library"? (Oh, and olympiasepiriot - excellent use of Shelley!)

Spot on @ 8:23AM. For other reasons I read the poem last night was VERY surprised to see it pop up here as the name of a realty company!!!! They even quote the poem on their website.... It's owned by former options traders so I guess that explains their misunderstanding of the meaning.

I totally noticed the Ozymandius irony too! "Look on my works and despair" was how I remembered it in my mind...we DO despair, it's so true!!!!

Oh no! worst of the worst for out-of-place locations. Simply horrible.

Plus the sophisticates will be right on the edge of the Flint MI of noise pollution - East 6th Street!

I'm curious about the wall of north-facing windows. What happens when (inevitably) the Rite Aid site gets developed and that entire side gets blocked? Not that I really care...

So is that plywood still flappin in the breeze or what? It's getting pretty windy lately. Get your shit together, whoever owns this piece of shit lot.

*sighs* meantime, are there fewer people who read Shelley each year, let alone understand the timelessness of his words? wondering.

The DOB looked at it and declared it safe? Did they send out a blind inspector?

And not only the plywood wall, but that sidewalk gate will eat someone real soon!

"Plus the sophisticates will be right on the edge of the Flint MI of noise pollution - East 6th Street!"

1) Gross. The rendering is just appalling. This is exactly the kind of building that the EV doesn't need! Yet another towering, dated, ugly "modern" building. "Timeless" my ass! I love this neighborhood because of the smaller prewar buildings (amongst many other things) and these buildings are an atrocity.

2) I walk by this lot every day and pretty much every time and think of the litigation opportunities - the sidewalk gate in particular is just asking for someone to fall through it and sue. If my rent gets any higher, I might consider the opportunity seriously.

3) Are my taxes paying that DOB inspector? If so, I would like my money back, please and thank you!