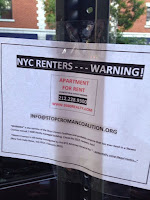 Controversial landlord Steve Croman, whose 9300 Realty owns multiple residential buildings in the East Village, reportedly ended 2015 with more than $1 million in unpaid building- and construction-code violations on properties he owns.

This is according to research by the Cooper Square Committee, the East Village-based tenants' rights group. As Crain's reported:

The fines that Croman and his firm, 9300 Realty, had accrued showcase the city's inability to collect about $1.6 billion in quality-of-life fines, known as Environmental Control Board (ECB) violations. The city has few means to ensure the fines are paid, giving some landlords and contractors leeway to continue to rack up infractions.

"The city issues quality-of-life violations when people violate construction safety rules, start construction before or after hours, or have dangerous sidewalk conditions—and nobody seems to care," said City Councilman Ben Kallos. "Many landlords and developers treat [the fines] as a cost of doing business."

A spokesperson for 9300 Realty disputed the $1 million figure. Here's more from them:

A Croman spokesman said that the firm invests in buildings prone to violations. "We invest in older properties with the objective of restoring and holding them for the long term," the spokesman said in a statement. "Due to the age of properties in Manhattan, these buildings usually require substantial upgrade and repair work. We take maintenance of our properties very seriously and continually invest to clear building violations and enhance the quality of life for all of our residents."

Among other things, Croman has been accused of using illegal tactics to force out rent-stabilized tenants. Tenants have also said that Croman hired a former NYPD officer to harass and intimidate them.

And in other Croman-related news making headlines... Steve's son Jake Croman, a member of the University of Michigan’s Tau Kappa Epsilon chapter, has been vilified on the Internet for a video in which he is seen berating an Uber driver in Ann Arbor, Mich., last week.

Uber driver Artur Zawada started filming Croman and his friends after they began harassing him when he apparently canceled a ride they ordered. "Fuck you Artur, you little faggot fuck," Croman yells. "You wanna kick me off? Kick me off, you little piece of shit. You're an Uber driver! Go fucking drive, you little fuck! Minimum wage faggot! Go fuck yourself!"

He added toward the end, "You're working all night! Guess what? I'm gonna sit on my ass and watch TV. Fuck you!"

In a statement to BuzzFeed, Jake Croman said, in part: "What you don’t see in the video is that the driver had made a number of offensive anti-Semitic remarks that provoked my response. I am not proud of my reaction to his discrimination and I regret my choice of words."

The Uber driver denied the accusations.

Jake Croman's LinkedIn profile notes that he is an associate for his father's real-estate firm.

This proves that douchebaggery runs in families. Last week it was drunk FratBro Peter Brant, Jr. being arrested at JFK for "allegedly" assaulting a cop, this week it's the father and son team of Steve and Jake CroMagnon being exposed for who they really are, and instead of just apologizing, they do iwhat all rich crybabies seem to do, they hire a crisis management team. What's next, Ben Shaoul.being sued by his parents for ripping them off? Oh I almost forgot, that already happened.

The apple doesn't fall far from the tree. Jake Croman is a major douche...the epitome of a 'Bro.

The acorn does not fall far from the slumlord.

Croman could have probably saved himself some money by unleashing his troll son on the tenants he was trying to evict instead of the disgraced ex cop.

Douche bag and a piece of shit. I don't believe in God, but I believe in karma, being a good person, and knowing the difference between right and wrong. What goes around, comes around. He will get what he deserves. This man is a bad person who has no empathy or concern for fellow human beings.

The death of civility.

and the system allows him to carry on with his business and keep his properties, and make money this way. that is the real atrocity. The city is complicit.
A million dollars in fines, means a great deal of aggravation for his tenants- that why in some cases, he doesn't need to fix - just slapped with a fine (that he doesn't pay)
Completely ridiculous.

It's obvious that dignity and manners cannot be bought. Super low class.

CroMagnon emptied a building on my block of its long-term tenants. He also ripped out the ENTIRE garden of that building and paved it over. Now the apartments are being rented to bros & their ilk with the understanding that summertime in the paved-over yard is for PARTIES (and to hell with the neighbors!).

As to his son, the nut didn't fall far, did it?

If a resident of NYC does not pay their parking tickets then the city comes after them and tows and/or impounds their car. We all know what happens when we don't pay our taxes. Why doesn't this city seize the buildings away from these Scoflaw Landlords like Steve and Harriet Croman who thumb their noses at the law and do not pay their fines. They default in court and do not make the repairs to correct the violations they were issued. The very worst part of all of this is that tenants are living in dangerous conditions with uncorrected violations..and DOB outrageously crowns these slumlords with new permits to do more illegal work. It's a vicious cycle.
So what good is the Department of Buildings ?

He really tried to use a pathetic "the other guy was anti Semitic" but it's not in the video excuse? As if anyone believes that POS.

CroMagnon emptied a building on my block of its long-term tenants. He also ripped out the ENTIRE garden of that building and paved it over. Now the apartments are being rented to bros & their ilk with the understanding that summertime in the paved-over yard is for PARTIES (and to hell with the neighbors!).


That sounds like the building on 2nd street between A and B, but he's doing it all over the hood, isn't he?

The strange thing is that previously, the garden was the gathering place for tenants.

If the city of New York collected the outstanding ECB and other fines on record with the Department of Finance from Scofflaws Steve and Harriet Croman and their entity 9300 Realty and from all the other predatory scofflaw landlords and the anon LLC's they hide behind, this city could easily get out of debt.

These outstanding ECB fines owed are just the tip of the iceberg! Anyone can go down to the Department of Finance and put their building address in and see all the other outstanding fines listed for their building that the landlord owes such as other unpaid fines from different agencies, sanitation fines, water bill fines, and liens, taxes etc., that are all there on record with the Department of Finance who does nothing to collect these fines. What good is DOF and DOB?

The problem is that laws are there .... but no one is enforcing them. These scofflaw landlords could not get away with this if the agencies were doing their job. The NYC Department of Finance's lack of collecting these fines is shameful. If they collected these fines, it could pay the salaries of the law enforcement officers they need to hire to collect them. As we all know the NYC Department of Buildings is disfunctional and the corruption within is a public disgrace.
They are really responsible for this lack of enforcement that place tenants safety and lives at risk. These very agencies that were set up to protect the public and our health and safety - instead protect the predatory scofflaw landlords that are milking this city, while the politicians turn a blind eye.

Thank you EV GRIEVE for this excellent article and for all the others over the years. It is an admirable and tremendous public service you do. Your good work puts these agencies and politicians to shame.

Jake Croman's work at the ERIC TRUMP FOUNDATION, did not stop his father Steve Croman from doubling the rent of a family with a small child who was undergoing chemotherapy treatments. You can read about it in EV GRIEVE. http://evgrieve.com/2012/10/despite-plea-landlord-doubling-rent-on.html

THE CROMANS ARE A CANCER ON OUR SOCIETY

And just to shed light on the nature of the family outside of the real estate world...
https://www.youtube.com/watch?v=Ueeo_Emhjco