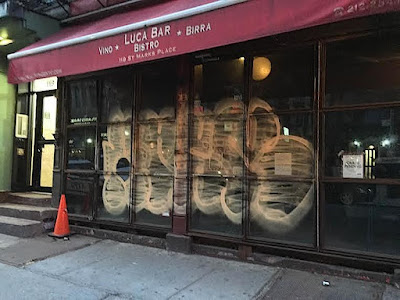 The former Luca Bar space at 119 St. Mark's Place between Avenue A and First Avenue looks to have another suitor.

A comprehensive questionnaire (a 30-page PDF) is on file for public inspection at the CB3 website ahead of the April SLA committee meeting.

According to the paperwork, the proposed Vietnamese restaurant (no name yet) would have 15 tables seating 42 as well as a bar with 12 seats. In addition, the proposed hours are 11 a.m. to midnight Sunday-Wednesday; until 2 a.m. Thursday-Sunday. The applicants are applying for a full liquor license.

While the three principals have never been licensed before, they have had experience managing-operating restaurants, per the documents. Two of the proprietors have worked for Stephen Starr's Starr Restaurants, whose NYC establishments include Upland, El Vez, The Clocktower, Morimoto and Buddakan.

Here's a sample menu that accompanied the CB3 materials... 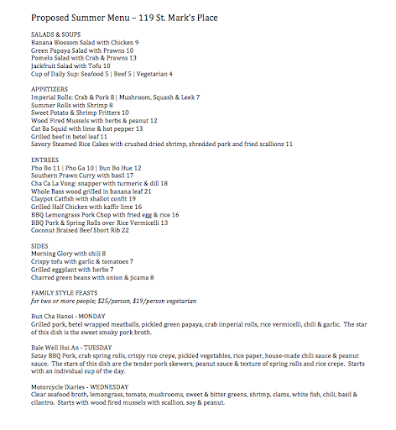 Previously, the owners of Sweethaus Cupcake Cafe — with locations in Charlottesville, Va., and Williamsburg (Brooklyn, not Virginia) — were looking to open a cafe at No. 119. However, those plans never materialized.

Would love a decent Vietnamese place, most of them around the EV are pretty meh

I don't have high hopes for any restaurant opening here, the immediate area is filling up with noisy bars/ restaurants so why would this one be any different?

Yeah, it'll be a Vietnamese restaurant 'aight: like Empellon is a Mexican restaurant.

Again they are giving you with the frazzle-dazzle of it being a "Vietnamese restaurant" with those proposed menu prices. CB3 would be gaga over this and enthusiastically approve them for a liquor license. And once they get their liquor license, it'll be just an upscale restaurant just like Buddakan -- "Huge, lavishly decorated restaurant offering a menu of Asian dishes & cocktails" and selling a good time in an adult playground. It's selling culinary dilution and safe exoticism. In other words another destination place for the transients to get their $20 coctails and foodie and foursquare and Instagram boner on. I know, I know, better than a frat bar...

It's always better to just leave the East Village and walk to Chinatown for Vietnamese food. It'll be cheaper, more delicious and you'll get some exercise in.

Why don't they just skip the "unremarkable Vietnamese restaurant" phase and go straight to the "another Meatball Shop outlet" phase?

They should walk by Soothsayer at night and think twice about this.