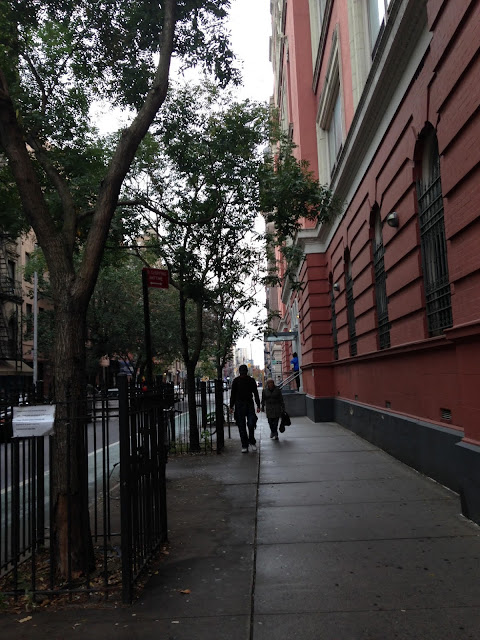 In early 2015, the Allure Group, a for-profit nursing care provider, purchased the building for $28 million, and months later paid the city $16.15 million to remove the restrictions that limited the building’s use, records show.

About three months after the city lifted the restrictions, Allure sold the building for $116 million to a residential developer that plans to convert it into luxury condominiums, over the objections of some community leaders.

Officials in the mayor’s office and at the Department of Citywide Administrative Services, the agency that lifted the deed restriction, had understood at the time that the property would be turned into a for-profit nursing home, Austin Finan, a spokesman for Mr. de Blasio, said Tuesday. 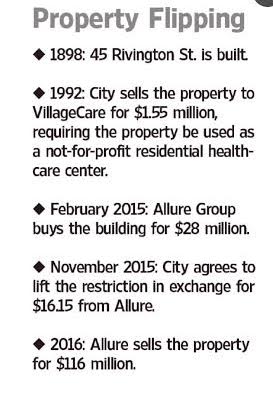 Here's more from The Lo-Down, who has been following this story, from back on Feb. 29.

The building is at 45 Rivington St., which overlooks Sara D. Roosevelt Park on the Lower East Side.

Previously on EV Grieve:
What next then for 45 Rivington St.?

They "understood" that it would be used for a for-profit nursing home? First of all, why was it in the public interest to lift the deed restriction, assuming there was going to be a for-profit nursing home? Second of all, what they "understood" doesn't mean squat when there's $50 million in profit to be made. I wouldn't rely on an understanding if $500 were involved. These are presumably savvy people. Aren't there any lawyers in city government who might have put the understanding in writing? If you think something is fishy raise your hand.

It should be Preet Barara and Eric Schneiderman, because this is criminal.

Scott Stringer do something about this scam, I voted for you and expect you to look out for all the citizens of this city not just the rich developers.

I wonder if this is a story of incompetence or corruption. I hope the investigation looks at who the principals are behind Allure and what their political connections are.

i cannot think of anything our elected officials or community board have done that benefits our neighborhood - for a long long time.

time for the lawyers to step in. that is the only thing government and businesses pay attention to.

talk is cheap unless it is government folks giving themselves a pat on the back and a significant raise because "they cannot afford to live in the city" they are supposed represent but did not protect,

This is happening over the entire city, it's all about the easy money.

This doesn't give me much hope for yesterday's City Council's decision promoted as the creation of more affordable housing. It looks like the decision calls for 20% of all units in a real estate developer's new construction be allotted as affordable housing, with changes to existing zoning rules to allow for increased concentration in affected residential areas. It's very difficult to find follow-up information on projects that included affordable units as part of the deal, showing that the units were built. Is it the Barclays Center deal that includes affordable units that have yet to be built?

I agree with Gojira. Somebody needs to be prosecuted for this.

Oof, the rotten fish smell here could strip the paint off a car.

Well, if you've been following the news lately, you know that DeBlasio - our Great Liberal Hope, er, hoax -- is really a real estate patsy -- and a political hack.

@12:13. Their should be a law requiring a publicly posted list of all affordable units provided at every building. It shouldn't be a mystery.

Scott fucking Stringer? Give us a break...

This is just more of his anti-deBlasio publicity seeking nonsense. It's no secret he's King Cuomo's preferred lacky come next mayoral election, and he seems to have dedicated the entire office of the Comptroller to doing anything possible to make BdB look bad. I'm sure Cuomo's lined him up with lots of his Big Real Estate campaign donors for the next election. Vote for Stringer and you can be sure of returning to the good ol' days of 8% annual RGB increases.

Sure, this was a shitty deal, but what can the comptroller do? The contracts have been signed, the property's been sold and there's no going back. The best the city could hope for is to sue Allure and make them share some of that windfall with the city. And I doubt even that's gonna happen, unless that "agreement" with the city is iron clad, which doesn't seem too likely given City Hall's shrugging response.

It's a raw deal, and it totally sucks. But Stringer's no white knight, and the only thing to come out of this will be another press conference or three...

Our mayor is continuing the "tale of two cities" by supporting this egregious transaction. Shame on Mayor de Blasio. Whatever happened to affordable senior care?

The city obviously didn't ask for enough money to lift the restriction. Frustrating, but municipal incompetence is not a crime. It should still be investigated and whoever fucked it up should be run out of public service. In the business world, more than a few people would lose their careers over that.

@8:27am: I vote "corruption" - there is no other rational explanation. This whole thing is just a corrupt give-away to a developer, IMO.

Again??? what else can this be except that our city council person hates us. This needs more than Stringer. The DA needs to look into this. Somebody got paid off, and it's looking like a pattern of deals on Ms. Chin's resume.

I agree with blue glass. It's a good question to ask: what have those who have been elected to represent us been doing for us? They take our money enough - what are we getting for it? Anything anyone can think of? Or are they just funneling it up to the wealthy developers and corporations and themselves with no return, like it seems? They give away PLENTY, all the time, millions and billions - but is any for us, the vast majority of New Yorkers/taxpayers?

Everyone involved is well-versed in the law and has access to lawyers. If this agreement was based on an "understanding" that was not then put in writing, it was done consciously and deliberately. That's not done by accident. Not at all.