[Updated] Support for Donald Trump at the Starbucks on 1st Avenue

To date, we've only seen more negative posters regarding Donald Trump's presidential campaign around the neighborhood... (like this one... or this one).

Now, a resident passes along these photos... showing Trump 2016 flyers in the windows of the Starbucks on First Avenue at East Third Street... 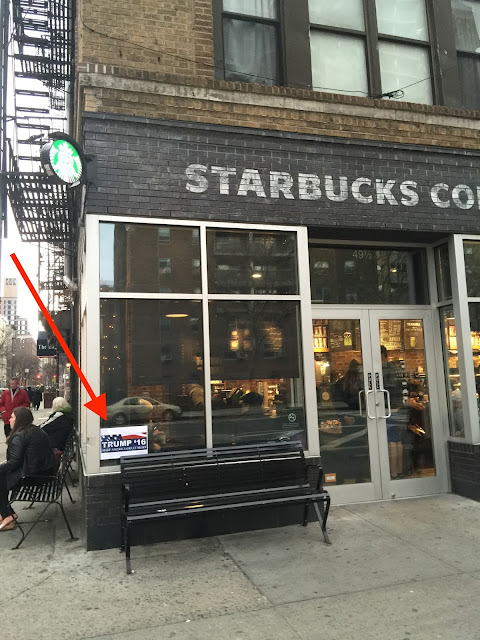 ...it's not known who placed these in the windows — a Starbucks employee or a random Trump supporter/Starbucks patron... 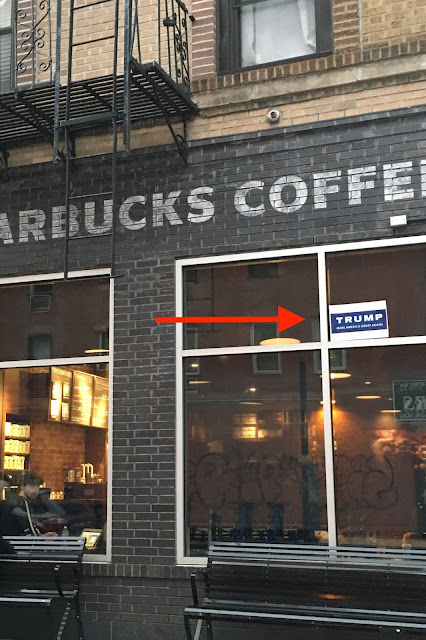 Coincidentally or not, the building here is reportedly owned by Jared Kushner, who is married to Donald Trump's daughter Ivanka.

According to a recent feature in The Forward, Kushner has historically "given almost exclusively to Democrats, including Hillary Clinton."

The signs have ben removed, DNAinfo reports. A spokesperson told DNAinfo that they were placed without permission.
Posted by Grieve at 4:00 AM

I doubt a landlord would have the balls to make owners of their commercial space support a candidate publicly like this. Then again we are talking Kushner here...

that take takes balls in a city of brain dead democrat sheep, it's gonna cause them alot of harassment...typical of libetards.

Hopefully it will cost them a lot of business.

If Trump gets elected, he'll deport most of the staff there,

Report this to Starbucks.

I think some prankster did this.

Up the Trump! Free Cappucino? Maybe it's an obscure way of saying, Wake up and smell the coffee America!

The Trumpachino is a volatile orange brew that violently shakes before exploding at the counter. It's more a dangerous entertainment experience than an actual beverage.

Actually @ 9:21am contrary to what you think, alot of people support Trump. Don't assume because its NYC that is not the case.

YEah because Goldman Sachs is such a great alternative to trump

I wouldn't report this to Starbucks, they'd swing the corporate ax on someone who needs the job, when it is just a prank most likely not done by an employee. Either way, no snitching!

Interesting article from The Forward, I thought honeypots were like strictly for fictional spy novels. Hilariously #$%^*-up family and people the trumps and kushners are.

Trumpachino is a drink that will be free to the poor and undereducated, has side affects such as dulling the part of the brain which controls logical thinking, heightens fear and anger in parts of the brain for long periods of time or until mid November.

"A lot of people support Trump."

Then we're all doomed.

Starbucks as a corp is very, very tied up with the Dems. I can't imagine that one of their franchisees would risk getting in trouble with the mothership since they can do very, very bad things to their franchisees with the stroke of a pen. To me, I really don't see the difference between one power mad crook and the other.

This is the work of a prankster. Even if his son-in-law does own the building, he wouldn't put the signs on a private business. I live right near his company's real estate office on 12th Street between A and B, and if he would put Trump posters anywhere, it would be there, and there are none.

I suppose this branch only serves vanilla lattes and white hot chocolate.

"hat take takes balls in a city of brain dead democrat sheep, it's gonna cause them alot of harassment...typical of libetards."

Oh this is such crap; Trump is not in any way shape or form a real conservative. Like Palin, Sharpton, he’s a grifter. Bill Buckley is rolling over in his grave. Hey, here’s your typical Trump supporter.:

Ed, there are also racists, criminals and murderers that support Clinton and Sanders, so what's your point? There are millions of supporters of each major candidate. There are going to be horrific examples of humanity in any batch that big. There are also going to be good, hard working people as well in all camps that just have differing views on the direction of the country.

One other item. It is very true that the left tries to shut down any dissenting expression, which is a classic left wing M.O. Stalin, Pol Pot, and Hitler (the worst examples of humanity in recent history, if not, ever) all did so. Although Hitler is associated with being extreme right wing, it's actually sort of a hijack of history by modern politics. He was a socialist. The official name of the Nazi party was the National Socialists. The Nazis were actually quite left wing.

This is sickening. Either it is a prank or the managers of this location must be held responsible. This is the East Village, one of the most liberal, accepting, and progressive areas of NYC, not to mention the rest of the US. Advocating on Trumps behalf in a city like this is as low as anyone can go. If he is elected, I will spend the following year, securing a work/student visa to France. He is a clown and a racist asshole among other things. Just my two cents..

This branch is right next to the Hell's Kitchen HQ down the block. Maybe a connection?

It's hardly surprising. Trump will take the East Village.

@12:51, What do you mean "held responsible?" This a free country with free speech. Don't let the door hit you on the ass.

Doesnt surprise me one bit.

The Nazis weren't just left wing, they didn't think the left wing Marxists were left wing enough; it was only the National Socialists who truly understood Marx, at least according to Thule Society's golden boy, Adolf.

The animus directed against Donald Trump is ... I was going to say 'fascinating' but in fact it's quite boring. You have to understand that Donald Trump is a 'limited hangout'; essentially he's Obama for the white working class and a sizable portion of the white middle class.

What's fascinating if not a bit depressing is how utterly unaware people are of what totally ignorant hypocrites they are. Apparently Donald Trump is a racist and bigot because he wants to build a wall and some such. OK, fine, maybe he is racist double plus ungood bigot -- what's wild is that most people making this allegation are ardent supporters of politicians who are zealous supporters of a certain little "state" that's built quite the handsome wall for itself and restricts immigration by means that these same proud, open-minded Americans would consider ... racist. I don't even think David Duke has called for people to take DNA tests in order to be considered for citizenship.

Seemingly racist/bigot is the epithet de rigueur for anyone who challenges the status quo these days. The fact is it's much easier for the members of the professional and aspiring-to-be classes with all of their politically correct and socially acceptable shibboleths to throw their hands up in confusion and label Trump supporters as racist than to so much as feign genuine curiosity as to why so many people are hooked by his rhetoric. It has nothing to do with jobs, trade, decades old stagnant wages, a bleak future and a complete and total lack of faith in their politically, legally, economically and militarily entrenched elites who do not care about them; who have as much loyalty to them and they do for the peasants that blow the fuck out of everyday in little shitholes around the globe you've never heard of. No, we can't figure it out so they're just a bunch of racists. And these are supposedly "educated" people.

And yet these are also the same people who've fetishized the working people and get all teary-eyed and wring their hands over the fate of our once robust middle class ... exactly who do you think is lining up for Trump?

So, for those of you with poor reading comprehension and critical thinking skills, do not read the above as support for Trump -- it's not. Your mission, if you choose to accept it, is to wise the fuck up and stop legitimizing a system based on lies, greed and exploitation with your time and energy. You know deep down beneath your socially conditioned persona and all the fears and insecurities there's a little voice crying "bullshit!" to all of this. May you shut up long enough to hear it.

Thank you for contacting Starbucks. I just finished reading your email and appreciate you taking the time to share your concerns with us.

First, let me thank you for bringing this to our attention. I am truly sorry that you had such a disappointing visit because of this. This is obviously not the experience we want you to have at our stores.

Our more than 200,000 partners and business associates around the globe, and the millions of customers they connect with on a daily basis have diverse views about a wide range of topics. Regardless of that spectrum of belief, Starbucks remains a non-political organization.

We do, however, continue to encourage respectful, honest discourse among politicians for the greater good of the country.

I want you to know that we take your concerns seriously and that I will share this not only with departments here in our corporate office, but also with the manager and district manager of this store to address this.

If you ever have any questions or concerns in the future, please visit us at customerservice.starbucks.com.

I can live without Starbucks. No problem.

Anonymous 1:07 pm said... This branch is right next to the Hell's Kitchen HQ down the block. Maybe a connection?

what is a hell's kitchen headquarters?

This is a Kushner building.