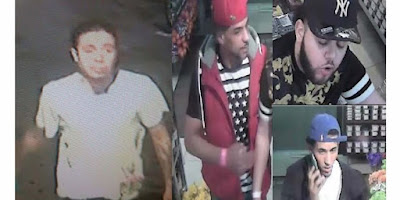 Metro has the story:

On March 11 at about 2:20 a.m. a 26-year-old and 23-year-old victims were walking near the vicinity of 119 East 11th St. when they were approached by the group of four men, who then assaulted them with bottles and punched them, according to authorities.

No property was taken during the attack and both victims were treated at Bellevue Hospital.

The reported attack occurred between Third Avenue and Fourth Avenue near Webster Hall.

Anyone with information that could help in the investigation is asked to call Crime Stoppers at 1-800-577-TIPS (8477). You may also submit tips online.
Posted by Grieve at 4:58 PM

Some good pictures there, particularly of the guy in the top right. They should be able to find at least one of them.

The police in your neighborhood can't go around apprehending real thugs when they're placing your community members in jail for having done nothing wrong other then defending themselves from folks like this!!!!

Remember that when you're going to the polls. You have no right to personal security and protection where you live!! The system is a sham just to keep individuals like those in this article out on the streets while normal everyday folk are accosted my members of what is described by some as a Police Dept. The police are nothing more than a criminal enterprise clouded over by the perception that they are something other.

The police are the only ones who should have no rights because them along with the judges and prosecutors are the corrupt class placing all in jeopardy.

Isn't that right in front of Webster Hall?
Thugs. Send them to forced labor.

i am outraged by the comment of how all police are corrupt and how they keep men like these out on the street because these victims were attacked by people on the street who were thugs, they could have been killed. they could be anybody a firefighter, judge or cop and are just and did not deserve this.i hope they find these guys who did this because the victoms are good people and deserve justice.