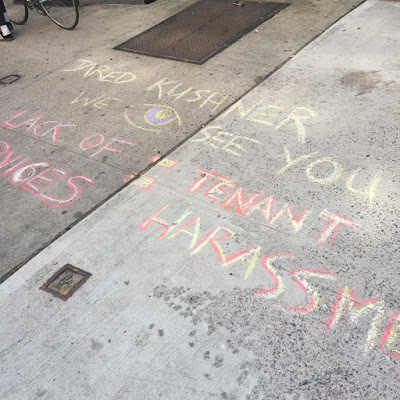 Gothamist checks in with a long look on life in a property owned by Jared Kushner/Westminster Management. And there haven't been any shortage of tenant horror stories since Kushner started buying up properties here in 2013, as we've noted at EVG through the years. (According to the Cooper Square Committee, Kushner is the neighborhood's second-largest landlord after Steve Croman.)

As we noted earlier this month, tenants at 118 E. Fourth St. went to Manhattan Housing Court on March 3 as part of ongoing litigation against Kushner. Tenants there had been without gas for cooking since October. There are other issues too, such as collapsed ceilings, overflowing trash and sporadic heat. (Tenants got the gas restored afterwards.)

In defense of Kushner/Westminster, a spokesperson responds: "Unfortunately, like many other old buildings in New York City, repair issues arise periodically and we inherited problems when we purchased this building. We are grateful that our residents have voiced their concerns. We value their tenancy and we are committed to a mutually beneficial long term building management-tenant relationship."

Brandon Kielbasa at the Cooper Square Committee tells Gothamist that Kushner "treats both rent-stabilized and market-rate tenants badly, and seems to feel that he can get away with not maintaining buildings because the housing market is so tight he can keep them full anyway."

And one outcome of all this in Kushner-owned properties, per Gothamist:

The economic differences between the old and new residents paying three times as much have also created a culture clash. Some longtime East Villagers, nurses and artists and filmmakers loyal to the neighborhood, resent the transient, party-animal culture of affluent students and out-of-towners in their first New York apartment who will be gone when their lease expires.

“We used to have a community in this building,” laments one man. Before ... Kushner, says Kim Stetz, “we didn’t have SantaCon in our building. We didn’t have raging parties with people throwing up out their windows.”

Jared Kushner's residents at 118 E. 4th St. would like gas for cooking and some heat
Posted by Grieve at 4:20 AM

I suppose the definition of a slumlord is to treat all your tenants poorly. These buildings are microcosms of the LES. Those that have a rent stabilized place know if they move they will never find another so they are stuck. The market rate tenants will have no problem finding another place to move to since they are already paying top dollar which means new short term market rate tenants with take their place, rinse and repeat.

I live in one of his buildings: worse than any of the previous landlords. He's a slumlord.

As a former tenant, I can confirm this is true. The people working in the Westminster office on 11th street should be ashamed of themselves.

Why is there only one eye? Is a cyclops watching him? Shouldn't it be a bunch of eyes hence the "we"?

Why is there only one eye? Is a cyclops watching him? Shouldn't it be a bunch of eyes hence the "we"?

Any truth to the rumor that Kushner is buying the old Nativity Church and LaSalle academy to develop?

I am not suprised..he is holding these properties to flip and make more $$$$$

http://www.nytimes.com/2016/07/05/us/politics/jared-kushner-donald-trump.html
A new NYT article (no comments section) about Kushner. It would be great to make the excellent EVG reporting about him available to a wider audience. I'm guessing that somehow highlighting the NYT link on the EVG blog may create a nexus between the two that would pop in search engines