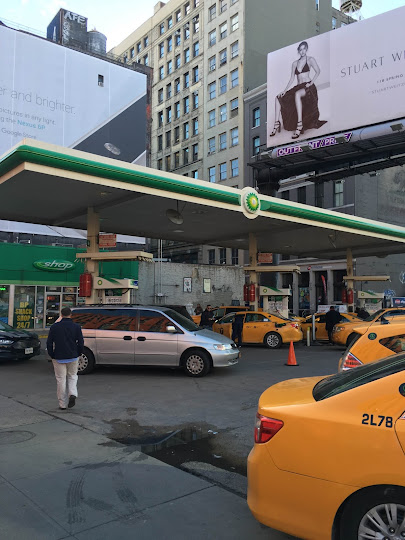 As we first reported last week, the BP station on East Houston and Lafayette is closing on April 14 to make way for a 7-story boutique office building.

With this closure, there will be just one gas station in the city below 14th Street — a Mobil on Eighth Avenue near East 13th Street. (There is also a BP on East 23rd Street at the FDR.)

Now as DNAinfo's Allegra Hobbs reports, community groups are concerned about the lack of options in the case of another disaster such as Sandy.

“We learned from that gas shortage that occurred in Superstorm Sandy how important this resource is to a community, and now we find ourselves with no gas stations anywhere near,” said Damaris Reyes, executive director of Good Old Lower East Side and chair of emergency preparedness group LES Ready.

“This does not do well for thinking about a balanced community with all of the resources that are necessary to help it be functional and resilient in a time of need,” she said.

You may recall the vehicles lined up for gas in the days that followed Sandy in November 2012 before the last two stations in the East Village closed ... and there were also lines of pedestrians filling up gas cans for generators at the now-closed Mobil on East Houston and Avenue C... 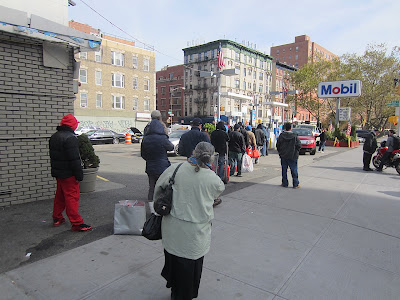 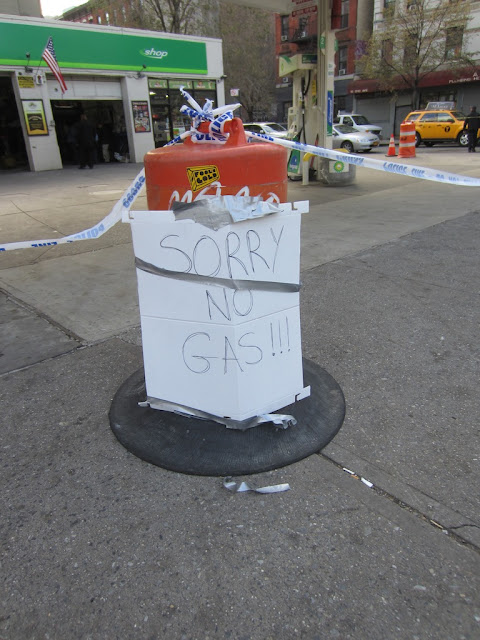 Heading to another borough or New Jersey would be a very real possibility, per DNAinfo.

“Having to cross a bridge or go through a tunnel to get gas is not the best way to prepare for an emergency,” said Trever Holland, president of the Two Bridges Tower Tenant Association. “If there are no gas stations to go to, it becomes extremely problematic as to how you’re going to get gas for generators.”

BP station on East Houston and Lafayette closes April 14
Posted by Grieve at 4:15 AM

That's because everything below 14th Street is a damn bar. Cut to Rosie and Stetzer pretending they care.

I guess I might as mention it here and now. I am finalizing a business plan for a mobile gas station - a 'gas on demand' service, if you will. Customers will be able to call in via an app and set up an appointment for a fill up, right where they are parked. They will have to be there to allow access to the gas cap, etc., but they will get service 24/7/365. Initially, we will be covering south of 14th Street. Prices are going to be competitive, or even better, because there is no brick and mortar to support. The delivery truck(s) are going to be smaller than oil delivery trucks, so we will not block traffic, especially on the side streets. Surprisingly, the city is amenable to this, and licensing is very doable. Look for a DeLancie Energy Deliverables truck real soon!

Gas is for cars. Cars are evil. So are gas powered generators.

Oh who cares about a little thing like that when there's millions to be made?!?

The blessed and precious Citibikes ain't no needing no gas.

Besides, alcohol[ic drinks] are what what people need more nowadays esp. on weekends. And speaking of weekends Mendez and Stetzer go out of town in their gas-guzzler lux SUVs/sedans.

A concern for whom? People can buy gasoline anywhere. Gas stations don't have to be as ubiquitous as delis.

The gas station needs to reinvent itself in order to attract enough customers to be able to stay in business.....how about a miniature golf course? Instead of 18 holes, they could have 18 A-Holes and the idea would be to putt a ball through the open mouths of the last 18 mayors of NYC as a historical teaching tool. Then of course they would need internet, free wifi, daily coffee give-away, cheap gas, full service window cleaners in bow-ties and coveralls, baby sitting services and perhaps a medical marijuana dispensary.

If you're concerned about the lack of gas stations maybe you need to talk to your legislators who are working to not have cars in the city at all!!

What do you think the city bikes program is all about??

My question is this how is trumpet man thinking of putting folks back to work when there are no cars in the city to bring the elderly around who make up most of the city and its dollars and with no trucks there's no way to deliver goods and services either.

Everyone relax. The drones will take care of everything.

Anonymous 9:22 AM: That is already a business.

You gotta admit, luxury housing is much more of a priority than transportation. Housing for people and profit!

With all these Mexican Taquerias opening up there is absolutely no shortage of gas in this neighborhood.

Bottom line is that NOBODY - absolutely NOBODY - at any level of NYC government thinks about this issue or cares about it.

Gas generators? Heck, who cares if infants, the elderly, and the disabled die during the next power outage? Certainly not the younger generation!

In the next crisis, good luck pedaling your shittybikes around when you discover that most food & supplies are brought into NYC via (gasp!) motorized vehicles that need gasoline.

And to all the young who are ragging on everyone who's not just like them: You'll find out *all about* being older and/or disabled some day, and when you do, you can expect the same consideration you are currently displaying on this issue.

I bet 9:22am has no permits to do this business.

And what happens if you spill gas on the ground and it hits a stray cigarette butt? Or someone inadvertently flicks a cigarette butt on the gas puddle however small it may be?

the city is complicit in the hyper-gentrification we've experienced over the past 20 years, including the loss of gas and car service stations.

The city's rezoning of this parcel from use as a gas station to residential housing has ALLOWED this to happen. If the city REFUSED to change the zoning of gas stations, the land they sit on would not be worth anything to developers. It's as simple as THAT.

You've been watching too many movies.