The former Contrada space remains on the market, though now with less key money 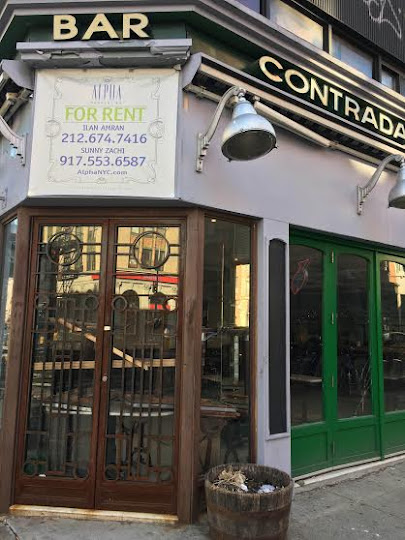 The for rent sign arrived at the former Contrada, the Mediterranean-influenced restaurant on Second Avenue at East Fourth Street, last July.

The prime corner space has seen several concepts in recent years, including Calliope and Belcourt.

Previously on EV Grieve:
Contrada has not been open lately
Posted by Grieve at 4:00 AM

Email ThisBlogThis!Share to TwitterShare to FacebookShare to Pinterest
Labels: Contrada, for rent

You need to be a millionaire in order to open and sustain a restaurant in NYC.

Come rent this failed restaurant's old space for more money than the last place that failed did. Also, just pay a little more a month, which you will totally make back in all your success killing it at brunch, for not having to outlay more key money. Myself and the owners do not think of you as a client, but a partner! ~selfless broker

Unless they are offering a full license from the SLA for operation of a Crack House or a Heroin Den then there is no way this rent is affordable. This corner location is automatically on the EV Deathwatch no matter who moves in there.

For the uninitiated, and from Ohio where you can buy a house on your credit card... what exactly is "key money"?

Key money is money for the fixtures and infrastructure in place like the stoves, ovens, hvac, fire supression, walk in, sometimes tables, chairs. Basically stuff you would need to buy or build anyway

This is why no small business has no chance of succeeding in Manhattan below 140th street. Every landlord wants a corporate renter or at least a chef driven restaurant which has a group of hedge fund people as backers. On the flip side small places like sushi restaurants or anyone place that survives on home delivery now pay about 14% Grubhub or Seamless tax which means those place are forced to raise their prices 14% to cover that extra expense.

The liquor license is key money, and in most cases, at this point in time, it's big money. I remember years ago, a small ev restaurant with full liquor, was selling their asset(liquor license), for like $325-$350.

Fixtures may be part of the deall, but usually new place almost always do gut renovations, which is ridiculous, because they usually wind up selling like one year later. In some cases, if it's a big corporation, they have the backing to gut renovate. At any rate, this restaurant must have been in a hole. It says, on the SLA site, that the license is inactive.

However, if a license is active, it's worth a lot of money. In other words, if a bar becomes another bar, there was, indeed, some kind of financial transaction, usually involving many investors. No one will ever know who the investors are because they don't have to disclose that information. In many cases, landlords have their hands in it, and the so called long time EV saviors of nightlife and culture are actually in bed with the real estate industry, and that is why the EV is almost extinct. You understand, it's usually the ones who claim to be saving the EV, that are actually the biggest liars in the world.

Entropreneurs are willing to spend big money, in order to get their hands on a prime location. In some cases they will bribe a business, and pay them off to disappear. We recently saw this happen.

I am saddened by this corner's slow demise over the past several years. It has a long run as Frutti di Mare, and nothing has survived more than a year or so since. Belcourt was lovely, and reasonably priced but never did the brisk dinner/drinking business it'd need to survive. I fondly remember my dad joking with the server there about the "personal eggs" on the menu, as in, not getting "too personal". I dread the thought of a chain/franchise opening on this iconic stretch of 4th street.

I loved contrada and belcourt.