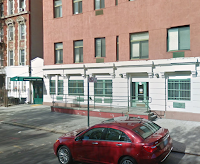 The operators of Barrier Free Living at 270 E. Second St. agreed to settle with the family of Ronal Garcia, who was fatally stabbed by another resident inside the facility between Avenue C and Avenue D in December 2009, the Daily News reports.

The $1.2 million settlement came toward the end of a month-long trial. The family of Garcia, who was 24, sued Barrier Free Living, arguing the city-contracted nonprofit for people with disabilities failed to protect the victim. Felipe Rivera-Cruz, who, like Garcia, uses a wheelchair, is currently serving a 25-years-to-life prison sentence.

Before the fatal encounter, the two men got into a fistfight after Garcia made a comment about Rivera-Cruz’s manhood, authorities said. They knocked each other out of their wheelchairs and on the floor during the melee before staff broke it up. The men were then separated and cops were called.

At the trial, Barrier Free Living officials claimed they lost incident reports filled out by staff during the attack. And they couldn’t find the portion of a video showing Rivera-Cruz ride past the security guard on the main floor.

Image via Google Street View
Posted by Grieve at 10:30 AM

Without knowing all the details of the case, nevertheless this seems madness.
The death is tragic, but how is it the fault of the facility? How is this just?
What about the actual murderer?

Uhhh cuz it happened in the facility whose job is to ensure people aren't killed among other things. They had a fatal lapse in security.

The murderer is currently serving 25 years to life.

The responsible party - the murderer - is being punished. I would like to understand why the facility is being held responsible, and what else they could conceivably do to assure that no such incidents could ever happen. It seems the equivalent of holding a landlord of a building responsible if two apartment renters get in a fight in the lobby.

Furthermore, such a lawsuit, in financially harming what is a nonprofit public service, will only reduce its ability to provide services to those in need.

If they 'lost' the incident reports and cant find video of the individuals involved they clearly have problems. Please understand that many facilities run by 'nonprofits' are -quite frankly- poorly run. They should be held accountable. This is not the equivalent of two tenants fighting. This facility is suoposed to provide a safe secure environment for the disabled. They clearly didnt. The city does an awful job of vetting and monitoring these 'nonprofits' who obtain city contracts. These are like the slumlords who run the homeless shelters. The notion that they are nonprofit means they actually care about the residents is absurd. This is a big business. I bet the people running this make big money.