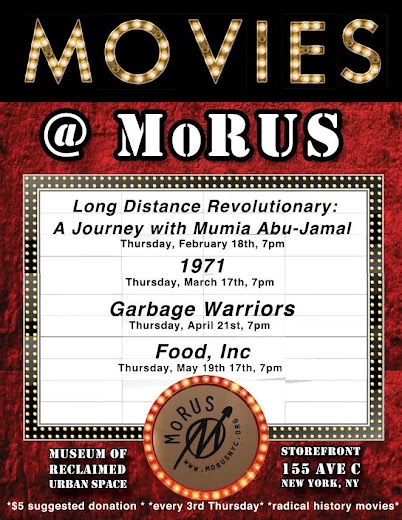 • Thursday, March 17 — "1971," dir. Johanna Hamilton, 2014, 80 min.
"On March 8, 1971, The Citizens' Commission to Investigate the FBI, a group of ordinary citizens, breaks into a small FBI office in Pennsylvania, takes every file, and exposes the FBI's illegal surveillance and intimidation of citizens."

Movies @ Morus, which play the third Thursday of the month, are free to the public but a suggested donation of $5 is appreciated. Showtime is 7 p.m. at MoRUS, 155 Avenue C between East Ninth Street and East 10th Street.
Posted by Grieve at 4:10 AM

Food, Inc. is such a great movie; I just wish they were showing it in a double bill with Forks Over Knives.