Teavana closes ahead of conversion into a Starbucks on Broadway 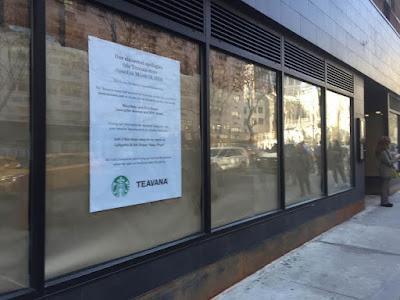 As expected, the Starbucks-owned Teavana has closed on Broadway and East Ninth Street.

Back in January, Starbucks announced that it will convert the three Teavana tea bar locations in New York into Starbucks stores by the end of April.

While the Teavana tea bars are closing, Starbucks will continue on with the nearly 350 Teavana retail outlets across the country

The Broadway-and-East-Ninth-Street space previously housed Silver Spurs, the diner that closed in December 2013 after 34 years in business.

Starbucks-owned Teavana coming to the former Silver Spurs space on Broadway
Posted by Grieve at 4:10 AM

The pied piper of expensive beverages couldn't get their followers to drink tea.

Another fucking Starbucks? There is a huge Starfuck's,(oh excuse me) A Starbuck's on Astor, literally right around the corner. Does this chain need to dominate our city and the coffee house culture? BS.