Report: An interest in keeping the Associated on East 14th Street 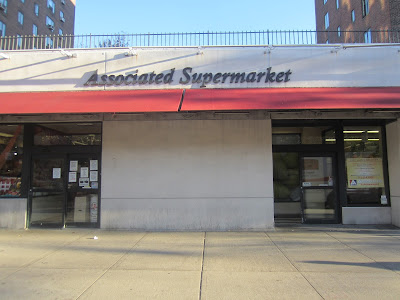 As you may have read, the Associated Supermarket on West 14th Street and Eighth Avenue faces a likely closure after the building's landlord served the market with a $168,000 monthly rent hike. Local elected officials and community members have been rallying to help save the market.

The owners of the Chelsea location also run the Associated in Stuy Town on East 14th Street between Avenue A and First Avenue. However, as previously reported, this store also faces an uncertain future.

The Town & Village Blog talked with principal owner Joseph Falzon about the situation at the East 14th Street Associated.

Falzon said that he and the other three owners are still working with Blackstone to come to an agreement for the Stuyvesant Town Associated before their lease expires for that store in 2017. No further information was available about a possible lease for the location but a representative for Blackstone confirmed that management is committed to having an affordable grocery store in that space.

Falzon also confirmed that the new owner seemed interested in keeping the store there and he and the owners had a good meeting with Blackstone at the beginning of the year.

Falzon, who, along with his partners, also operates the Avenue C Associated, had wanted confirmation of a lease renewal so that he could renovate the store.

Report: New Stuy Town owner pledges to keep a grocery story on East 14th Street, but it may not be Associated
Posted by Grieve at 4:10 AM

Would be a neighborhood success if this stayed as an Associated. Wouldn't mind renovations either. Good for Blackstone.. so far. That 8th Avenue landlord is a real #$%^ $168,000 rent hike is the highest I've heard of.

StuyTown NEEDS to keep this supermarket for the benefit of it's many residents. There's no need to "upscale" the location, and the Associated doesn't bring blight to the neighborhood and overall offer very reasonable prices. They go above and beyond serving the areas seniors by offering telephone ordering which is essential for those who just don't have computer access or ability. Especially in light of the DeBlasio administration's deal with Blackstone to keep 5000 apartments "affordable" for the next 20 years, it would be a slap in the fact to the city, that agreement, and their tenants. Hopefully, Blackstone will see the light and offer Associated a reasonable lease renewal.

Kiss reasonably priced food goodbye, it will be in the last ship sailing along with reasonable price rent.

Second that. The people at Associated are all very nice. They actually work really hard to serve everyone in the neighborhood and do a damn good job. I'd hate to see them replaced. Please don't "fix" what is working just fine. Not every supermarket has to be gourmet/fancy. Basic is handy, useful.

I live closer to the Associated at 8th and C, and don't find the one on 14th to be that great, to tell you the truth.

I've bought moldy bread—didn't discover it until I got it home—from the 14th street Associated more than once.

Even though the one at 8th and C is right on my corner, I trust the Key Foods at 4th and A with more of my purchases, when it comes right down to it.

Nevertheless, I would sign a petition—for what that's worth—to keep the 14th street Associated.

Given the luxury development going on right across the street on 14th, I am not hopeful this location of Associated will remain and/or remain unchanged. Blackstone has no interest in serving the low to middle income PCVST residents, they're being forced to keep 5000 units affordable - forced. Otherwise they continue to jack up (on average about $500 per yearly lease renewal) the market rate units, turning over units year after year, filling them with privileged students/post-collegiates, various transients, generally those not interested in contributing anything to the community or their Stuytown neighbors. I live in ST, I shop at Associated, I see how folks are struggling. It's shameful.

How about Key Food? Much better prices than Associated and much better deli counter and produce section!

And yeah, Avenue C Associated is ridiculous. Two days ago, my checkout girl was on a headset phone call talking about how she's about to "smash some bitch" if she doesn't realize she's stepping in the "fucking danger zone nigga". HORRIBLE.