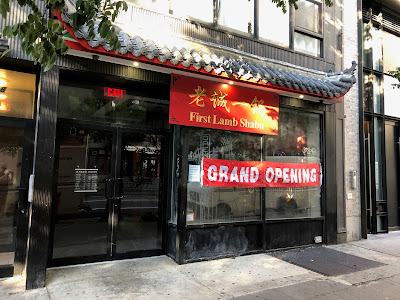 First Lamb Shabu, a Beijing-based hot pot chain with more than 300 locations in China, has opened its first Manhattan outpost at 218 E. 14th St. between Second Avenue and Third Avenue. (There's also an outpost in Flushing that people like.)

As the name implies, there are many lamb options — per Eater — "from chops to spines, and also has fun add-ons like a Hello Kitty-sculpture made out of beef oil, as well as a fish-shaped fish pudding. Besides traditional broth-based hot pot, First Lamb Shu also does a lamb stew — where broth arrives with spiced, bone-in lamb ribs."

And a photo of the interior...

The build-out took awhile. We first noted this arrival in April 2018 (via the Commercial Observer).

The storefront had been empty for several years, ever since Dunkin' Donuts decamped for a smaller space on the block in August 2015.

The Dunkin' Donuts space on East 14th Street is for rent
Posted by Grieve at 4:00 AM