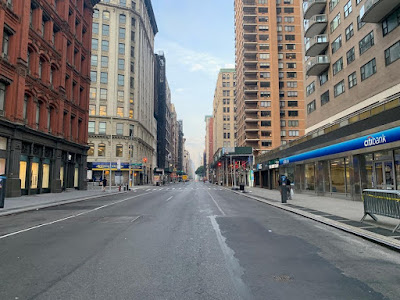 [Early today on Broadway near Astor Place via Vinny & O]

• A feature on SSHH, the design studio and creative event space on Sixth Street — "bringing back the weird in a city ruined by wealth" (AIGO Eye on Design ... previously on EVG)

• The fight over the 14th Street busway could determine NYC’s transit future (Curbed ... previously on EVG)

• The Post drops an editorial on the garbage trucks parked on 10th Street. "It’s yet another case of the city failing to do its basic job, while Mayor Bill de Blasio is off playing carnival games at state fairs and giving 'speeches' to near-empty rooms in his fantasy bid for the White House." (The Post ... previously on EVG)

• The oldest home in the East Village (Ephemeral New York)

• "Fashion’s so corporate these days, 'Desperately Seeking Susan' reminds us that clothing is a personal signifier of identity connected to place and time." (Vogue)

• Fong Inn Too makes a comeback in Chinatown (The Lo-Down)

• In celebration of the 500th anniversary of Havana, the Anthology Film Archives joins forces with the Cuban Cultural Center of New York to offer a wide-ranging film series inspired by the city's history and culture (Official site)

And in Hump Day freebies, you can find the Nutmobile handing out "free food made with delicious Cheez Balls powder" today on Astor Place... Lola Sáenz spotted the Nutmobile en route ... 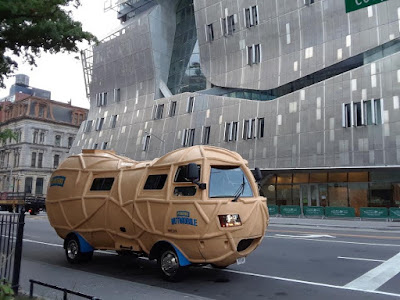 That Michael Jordan comic t-shirt is funny and rad.

That first photo is eerie of Broadway and Astor. Why is it so empty? It reminds of that shot in Vanilla Sky where Tom Cruise's character, David. runs through Times Square without a single car or person in sight. He just runs and runs and screams and there is nothing. It's a scene I have not forgotten. And this very image transcends that for me at least. Beautiful yet strange.

" "bringing back the weird in a city ruined by wealth" - I think Epstein showed the rich are the weird people - we working people just want some stability and reliability and predictabilty so we can live our lives - I know, disruption is the only God to worship now.