Crane crew spotted at the former P.S. 64 on 10th Street 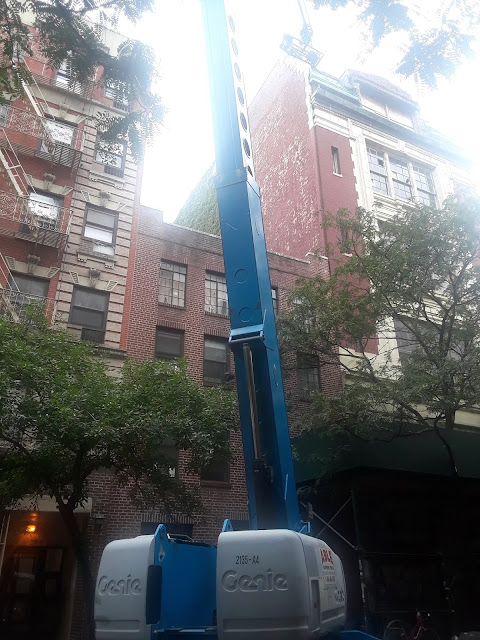 Several EVG readers yesterday reported a boom lift and at least one worker giving attention to the northeast-facing facade at the former P.S. 64 on 10th Street between Avenue B and Avenue C... 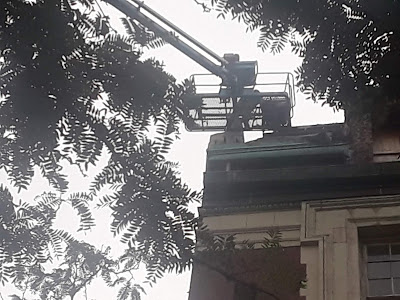 This is the spot where city inspectors examined back on Feb. 6 and, a week later, issued a Full Vacate Order. This marks the first activity that neighbors have noted at the long-vacant property since then.

Developer Gregg Singer bought the property — the former P.S 64 and CHARAS/El Bohio community center — from the city during an auction in 1998. The building has been empty for years. (Singer reportedly has an office on the premises.)

The vacate order is dated Feb. 13. According to the DOB (in their ALL-CAP STYLE):

AT VARIOUS EXPOSURES OF EDUCATIONAL FACILITY, ORNAMENTAL FACADE ELEMENTS ARE IN A STATE OF DISREPAIR WITH VISIBLE CRACKS, GAPS, AND DETERIORATION. THESE ORNAMENTAL ELEMENTS HAS THE POTENTIAL TO FALL INTO THE STREET AND YARD. IN ADDITION, INTERIOR FIRE PROOFING ARE MISSING THEREBY EXPOSING STRUCTURAL STEEL MEMBERS. THESE CONDITIONS HAVE MADE THE ENTIRE BUILDING AND YARDS UNSAFE TO OCCUPY.

City inspectors eventually determined that the building was safe, but did issue a violation to Singer for failure to maintain the exterior facade for cracks observed on the corner of the building at the third floor, as Curbed reported.

Singer told Curbed at the time: "It’s all political. This is part of a concerted effort to put pressure on us. I was just at the building. There's definitely cracks — that we were already aware of — that will be pointed and repaired, but there’s no immediate danger."

Perhaps this work yesterday was to rectify the vacate order.

Singer has wanted to turn the landmarked property into a dorm called University Square, which continues in a holding pattern while the DOB maintains a Stop Work Order — dating to August 2015 — on the building.

On Feb. 7, local elected officials gathered outside the building and urged the city to reclaim the property for community use. Singer has stated that he will not give up the building.

They ought to go to the building at 2nd Ave and 6th street - its had scaffolding up for years now and never any workers. I am unable to walk from my apartment to the subway without encountering some kind of scaffolding. Bloombergs dream - every sidewalk encased in scaffolding - is coming true...scaffolding is yet another undeclared tax citizens must pay to the real estate lobby.

@Anonymous 11:53—Think of scaffolding as temporary housing for the homeless; they sure do.

The HoBo Hiltons. Will that be a single or double box, sir. Enjoy your stay.

Update: The crew has caution-taped the scaffold and the crane is parked overnight.