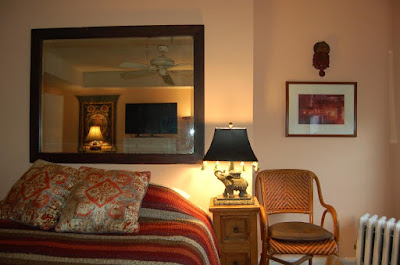 East Village resident Susan Schiffman has been photographing the apartments of rent-stabilized tenants living in the East Village for her Instagram account, I Am a Rent Stabilized Tenant. She shares some of the photos here for this ongoing EVG feature.

Why did you come to the East Village. How did you find your apartment?

I was here in the summer and I lived on Bleecker Street with a bunch of hippies. They told me “don’t ever go past Third Avenue. There are speed junkies in railroad apartments.” I was scared.

I went back upstate to where I am from — North Tonawanda. I came back down to buy astrology books in the East Village. We didn’t have the internet then and I couldn’t find the astrology books anywhere else. The Astrology Center was on Sixth Street next to the Cauldron, the macrobiotic restaurant. I was checking out the neighborhood and thought “this place is groovy.” You had Pete’s Spice and Natural Food stores. I didn’t have any of that upstate. It was 1971.

I came back down to the East Village and I had my daughter with me. I am a single mom. I got a job working on this street. My father and my brother build sailboats. My grandmother and grandfather are pastry chefs. I had the culinary thing and the woodworking thing. The town where I grew up is where they created the first hand-carved carousels. My grandfather lived across the street and he would take me in there to go on all the rides.

I started a woodworking job. I needed a place to stay. My boss said go talk to Mr. Kuperberg. I went over there and said “Mr. Kuperberg, I have a kid, I have no money, I need a place to stay.” He gave me the keys. When I came in the apartment it was all chocolate brown and lime green. Two dancers from "Fiddler on the Roof" lived here. Before I moved in the apartment was two separate apartments with the bathroom in the hall.

I opened up a shop on Sixth Street and I built handmade wooden instruments. I was with the NYS Council on the Arts. I moved uptown and was working at a furniture store called Impressions in Wood. I made gift items for Macy’s and Gimbels. Then I came back down to the East Village.

By this time I had had a couple of close accidents with the table saw. I thought this is the time to give up the sawdust and I’m going to open a coffee house across the street. There were 12 restaurants in the neighborhood in 1978 — I counted.

When I opened my restaurant, I wanted to have a piano and a little cafe. Joel Forrester is a famous jazz pianist. He came over to play. People kept asking me to make food and at the time I didn’t really know how. Eventually it grew into a 70-seat restaurant. There were lines out the door. We made our own tofu and aduki steamed buns.

I had that big restaurant and then the 80s came. Pluto was just going into Scorpio: everybody was getting AIDS; people were going into rehab; self-help books filled the shelves at Barnes & Noble. All of the astrology books went out.

Pluto was in Leo when I was born, it was all about rock and roll then, Mick Jagger, etc. When Pluto was in Virgo everybody was eating natural foods and starting companies that reflected those interests, including macrobiotics. Then Pluto is in Libra, we have Studio 54, disco and then we go into rehab, Pluto went into Scorpio right after Libra.

An astrologer came here and he said you know “Pluto’s coming and he’s going to sweep everyone, just take them away." And it happened, everybody got AIDS, people disappeared. Keith Haring had been in my restaurant every day.

I was going to buy the building for $100,000 but I would have to kick everybody out to make it work. I just couldn’t do it, I’m a spiritual person.

Somebody came here, bought the building, chased all of the old ladies out and said “I’m going to raise your rent five times or I’ll make your life miserable." So he made my life miserable. Unbelievable. He stuffed rags down the sewage system so the sewage would back up in my restaurant. He was doing so much construction. There were rats running around. I decided I’m done. 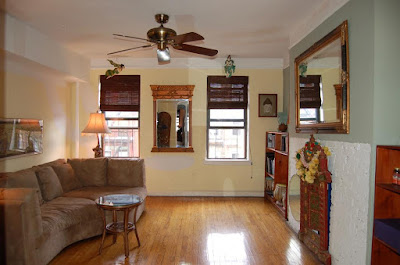 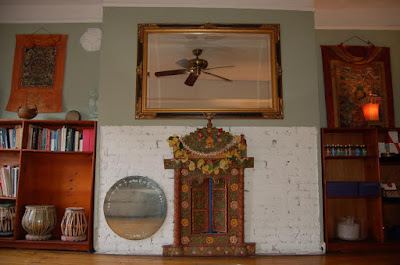 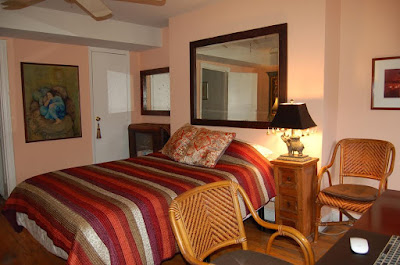 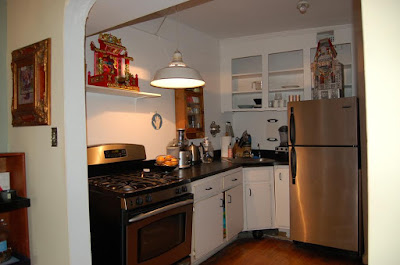 I’m still here. It’s been 41 years. An astrologer told me “your lights are fixed, you will never move.” I wonder how many more years can I climb the stairs? In astrology we can look at your 4th house and we can see what your home is going to be like. You come in here and you say “neat. She’s neat.” That’s Saturn in the 4th house, no messes. On a good day it’s sunny. That’s Leo in the 4th house. 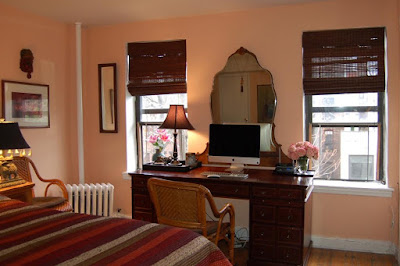 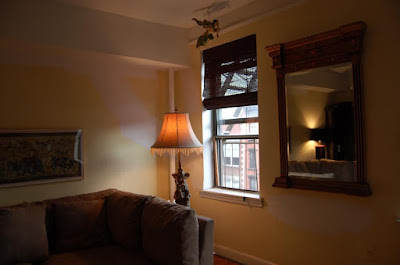 I like the Southern exposure. I like the brick. I look over the buildings on Led Zeppelin’s Physical Graffiti album cover. I was there too, when The Rolling Stones made their “Waiting on a Friend” video on this block.

This is a real creative vortex. I’ve seen a lot of people create around here. One friend told me the East Village is a fertile crescent — it’s the vortex, the center of the universe. It’s really true. You get the most amazing people. 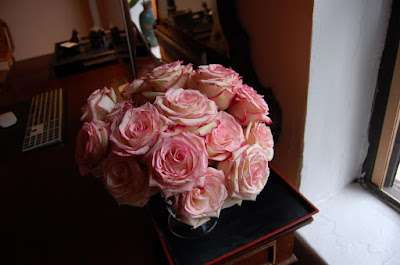 If you're interested in inviting Susan in to photograph your apartment for an upcoming post, then you may contact her via this email. And read about her in the new issue of The New Yorker!
Posted by Grieve at 4:30 AM

One of the best interviews yet. Thank you for sharing.

Beautiful place! I'm a little confused about the story, though. What happened after the rats and the sewage and "I'm done"? How did she get through that? I'm curious! (And very sorry she had to endure that!)

Absolutely fascinating, and so far the nicest apartment I've seen in this feature. Thanks!

I'm sitting here in the middle of decluttering my tiny apartment AGAIN and see this super sparse home. Her paring of items and supreme neatness are inspiring. I do not want to be so minimalist but god damn if I'm not impressed by her ability to be one.

Love this! I wonder if she reads astro natal charts?

A beautiful apartment & a great interview! I seriously admire her ability to maintain such a calm and lovely un-clutteredness, esp. having lived there for so many years, as well as having raised a child there.

With the high rent now about to drive us out of our home of 30 years, I can't help but feel envious, and even angry about the deals the people in this feature enjoy. I don't want to feel that way, but I do. Being human can sometimes suck.

May everyone always be as lucky as these people.

NORTH TONAWANDA! Jenny, hello neighbor, I was born there — lived in a pink house on Bear Ridge Road in the middle of no where. My civil engineer father/nut had secretly built a BOMB shelter under our house in the dead of night. There were hunters around, so my Mother put me into a bright pink snowsuit to prevent me from getting shot. WE SO KNOW SNOW, right? I moved to 13 St. Mark’s place above EV Books in 1982, around the block to E. 9th in ’85, and have been here ever since. I would LOVE to meet you. Dorothy

Wow - another North Tonawanda born EV resident here- who knew?! I did not move to NYC until '98 though, EV in '08. What a beautiful home, such a lovely story and wonderful story-telling. I love this series that gives us a glimpse into the homes and lives of neighbors. Thank you! -Amy

So cool - A trip down memory lane with a "Trippy fabulous lady"!

Jen and Tim in Thailand said...

Hi Dorothy, It would be great to meet you. Send me an email and we'll set something up. Dearjenny@gmail.com