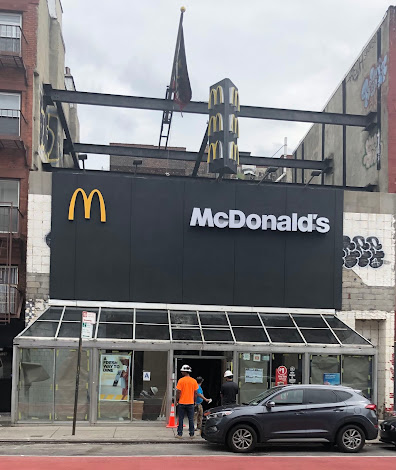 The McDonald's on First Avenue between Sixth Street and Seventh Street closed last Tuesday for renovations that are expected to last three weeks.

Workers have already cleared the sidewalk bridge. And yesterday, part of the new McD's facade went up as the top photo via Steven shows.

McD's facade watchers — currently one person — are said to be anxiously awaiting the final facade reveal. 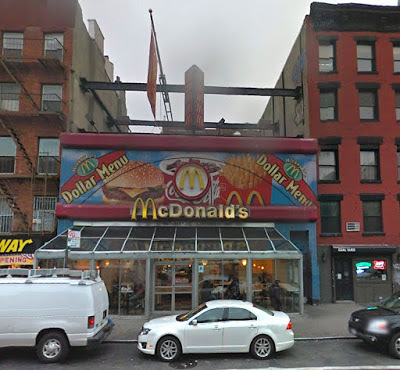 ... to make room for a big Big Mac and large container of upside-down fries... 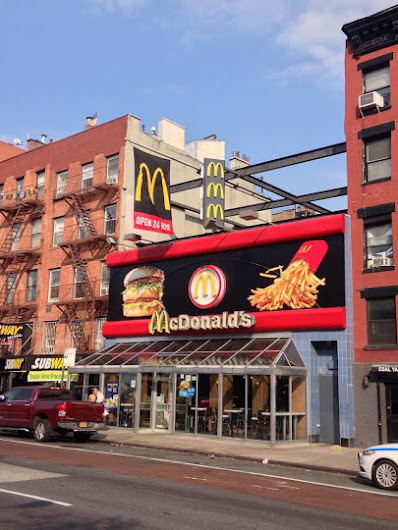 Meanwhile, the owners of Organic Grill nearby on First Avenue are offering currently displaced McDonald's customers a deal... if you don't like your meal. then it's free...

As for the "McDonald’s Free for the first time in at least 20 years" line... I know we talked about this before — this McDonald's location has been around since the 1980s. (If someone wants to chime in with more exact info...) 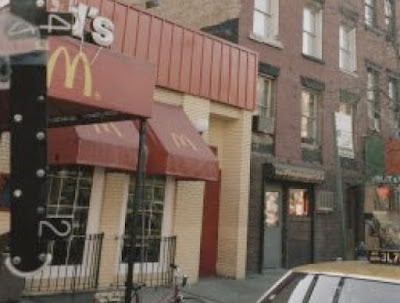 Email ThisBlogThis!Share to TwitterShare to FacebookShare to Pinterest
Labels: McDonald's

Well, the 80s McD's didn't exactly fit in to the style of the building line, but it was at least restrained. The new one is a gigantic FUCK YOU! to anyone who wants a brief respite from being shouted at by ads.

And, of course, it makes our neighborhood just a little less unique and more like every other place in the country, and that's by design, since they want every place to look the alike.

In 1981 my first apartment was on 6th near Ave C. I walked by this spot most days to get to the 6 train if my memory serves me right I believe McDonalds opens around 1982.

This is cause for a celebration!

You lost my "in touch with the neighborhood" business at "Hey Lower East Side residents!"

These new McDonald’s have all the warmth of a LaGuardia Airport lounge. The old ones were homey and child friendly, even with the plastic seats, bit now they are going for a more hi-tech look with giant touchscreens, fewer cashiers, and minimalist furnishings. They also seem to be trying to hide the kitchen area to make you forget it’s a McDonald’s, and the new seating and tables look more like a Chipotle.

As for referring to the EV as the Lower East Side, that is fairly common, and the closer you get to Houston Street the more often you hear it used. On local TV news reports I have also seen parts of the EV referred to as Stuyvesant Town, Alphabet City, Chinatown, Greenwich Village, and of course, Midtown South. But as we all know by now, the new improved east Village is now officially known as BroDeo Drive.

I wish the burgers weren't so highly priced at Organic Grill - and their delivery system is terrible.

I was on the Community Board in the mid-1980s, when the franchise holder for this place came in front of the Land Use Committee to apply for the glassed-in sidewalk extension. She was a woman of color, and I remember she basically told us if we didn't vote for her to get it that we were racists. She got the extension, even though a lot of us didn't want to vote for it.

Why does this McDonalds qualify for a sidewalk-hogging permanent enclosure? It's always tight and a nuisance squeezing by there.

Try outdated and filthy AF. If ever I craved fries or a shake, I avoided this spot as it was usually quite dirty with a lot of shady people hanging out near the windows up to no good. This particular location also reminded me of of the local McD's in my childhood hometown during the early nineties with the dull colors on the walls and floors, the shiny plastic seats which remind me of a being on a bus. It is time for a massive upgrade. Change is good. I happen to like sleek and minimal. And I am sure others do too, after all it is almost 2020. Instead of harping on the past we can't get back, let's try to embrace the future. :)

Here’s another reason why these new minimalist designs don’t work: at first they look all shiny and new, but they quickly start to look grimy and beat up from the wear and tear of thousands of customers.

All of the local Chipotle’s have this problem. Take a look at the one in StuyTown, at the end of the day it looks like it has been completely trashed after a big frat party. I almost walked out last week, but was hungry and craving their lime cilantro rice. Luckily I didn’t get e-coli food poisoning, but I won’t be going back.

When people are eating food they don’t want to see all the grime, fingerprints, dirty floors and tables. Unless the staff is constantly mopping and wiping down tables, which they are not, these high tech stores can look pretty awful. So go enjoy your happy meals while you can before the new place gets grungy.

I've always found this McD's to be low-key and comfortable. A lot of older people hang out in the glassed-in area. If it weren't for the giant sign, I'd almost forget this was a McD's at all.

I went into the Astor Place Starbucks soon after their upscale revamp.The banquet seating meant cozying up to strangers as if we were on the subway. The whole space was uncomfortable and awkward. Never been back.

@9:47 That’s so true, these newer spaces are too cold and alienating. The older people who gathered at the old McDs were much more comfortable in that space than they will be in this new one, and that’s probably the whole point. McDonalds doesn't want people hanging out, they want people to get their food and leave quickly. I noticed in the new Starbucks that that make you sit at communal tables, which means lots of awkward elbow bumping and eye contact, which also helps turn over tables faster. The problem is that if the space is uncomfortable, pretty soon all you will have is empty tables. It’s like they think everyone wants to sit in a communal space like they have at WeWork. Not for me.

For the exception of that kid from the nineties, is everyone on this comment thread born of a certain era? Why do so many have an axe to grind with this renovation? It's McDonald's for Pete's sake. Get a grip people. Start complaining about things that truly matter like the upcoming demolition of the east river park.

and a side of fries... supersize the air-rights please!

I checked out the McDonalds on 14th Street today and boy the commenters are right, it looks so barren and unwelcoming compared to the old one. For some reason the floor is a very light colored marble or poured concrete, which easily gets dirty and shows the footprints and dirt. The old brown tiles did I a better job of hiding the dirt, and the old yellow and orange seats from years ago were much more festive. Someone better tell McDonalds corporate they are not in the business of being trendy or winning design awards, they're in the food business.