On the October CB3-SLA docket: An applicant for 99 Avenue B, former home of Manitoba's 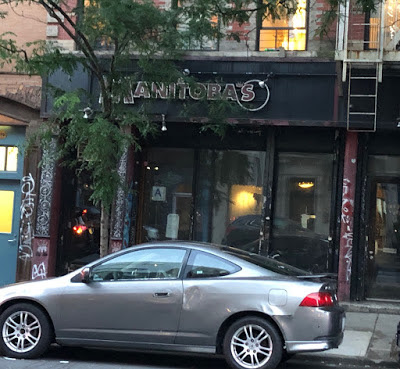 99 Avenue B was the longtime home of Manitoba's, which closed after nearly 20 years in late June.

Reps for Murray Street Restaurant Co. will not be appearing before the committee next month, however. (This is often the case when applicants agree to stipulations ahead of time or their method of operation is — paraphrasing — not a beer-pong shitshow and an actual restaurant. Also, when there's a change of personal in the corporation, as it appears in this case.)

According to the State Liquor Authority, the license at Manitoba's, whose premises name is currently Genco Importing Inc., is active through March 31, 2020.

There currently isn't any application for Murray Street Restaurant Co. on file at the CB3 website. Will update when more information becomes available.
Posted by Grieve at 4:20 AM

Isn't Murray Street Restaurant co Harry's steak, Bathtubgin, Dead Rabbit et al? Considering the laying of waste they did to stone street, it doesn't seem appealing to bring this nonsense to the EV.