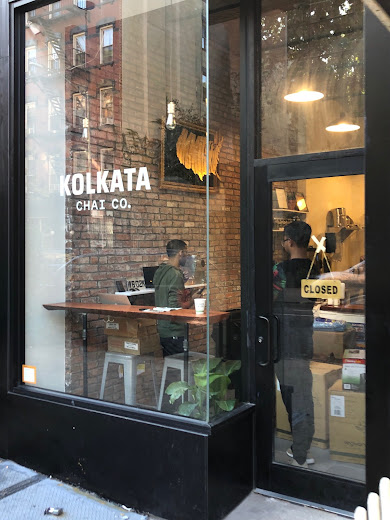 It's opening day for Kolkata Chai Cafe at 199 E. Third St. between Avenue A and Avenue B.

The small shop, run by two Bengali-American brothers, will be serving today from 4 to 10 p.m. ... with a menu featuring a variety of masala chai and several snacks ...

Our parents left Kolkata in 1987 and landed in Massachusetts to fulfill the American dream. Growing up as first-generation Indian Americans — our concept of home was ever-shifting. In 90s America, we listened to hip hop, ate pizza and begged our parents for a pair of Vans sneakers. Every other summer or winter, we’d spend a couple of months in Kolkata. An earth-shattering contrast, there, we would jump in monsoon puddles, eat mangsho-jhol, play cricket in the streets and drink chai everyday.

Food was always better on the streets than it was inside the house. The street wallahs possessed almost magical skills — we claimed they had special sauces and spices that they told no one about. There was a lore to street food. It was democratizing, generational and spoke to all socio-economic levels. We went to the same spots where our mother used to get bhel puri during her college times — where the chef’s father used to serve our grandfather.

Kolkata Chai started with a simple idea: How do we extend the authenticity, respect and tradition behind a cup of masala chai to NYC?

Chai has been repeatedly bastardized and appropriated in the U.S. We’re putting it all on the line to make sure our culture and traditions are represented accurately and honestly. We hope to see you along this journey.

This is the first permanent retail space for the two, who have been catering and offering their Kolkata masala chai via pop-up venues. (In opening this spot, the brother have said they've avoided common "South Asian food tropes.")

Chai made from scratch instead of a mix is SO GOOD.

Ooooh this sounds like a great, unique addition to the neighborhood. Hopefully, they can make it work!

Hell yes, I am there!

this place looks great, and the owners have their hearts in the right place. welcome to the EV, fall is the perfect time for some real chai tea

looking forward to it.

and above, please don't use "chai" and "tea" together, it's redundant.

the line is insane!!!

Nice story, welcome to the neighborhood.