At the opening night of the Vector Gallery on 3rd Street 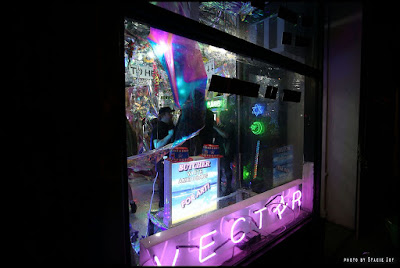 Last night, the Vector Gallery — aka the Official Gallery of Satan — made its debut at 199 E. Third St. between Avenue A and Avenue B.

Founder JJ Brine (below in the camouflage jump suit) previously held forth on Clinton Street, East Broadway ... and in Los Angeles.

EVG contributor Stacie Joy stopped early and shared a few photos ... there were various "Sermons/Situations/Soliloquies" later in the evening for the opening ... 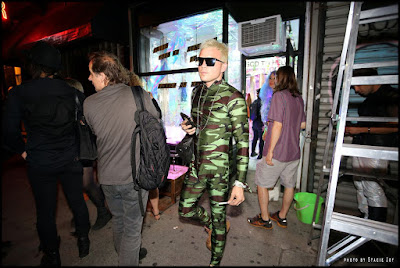 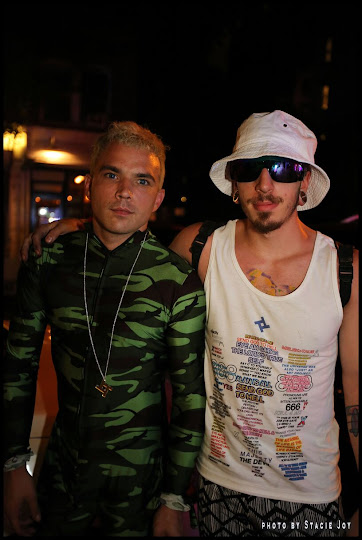 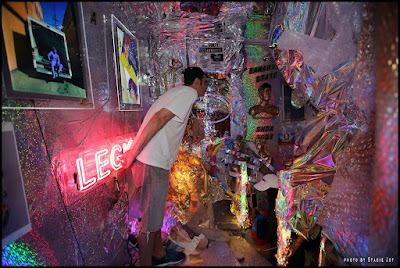 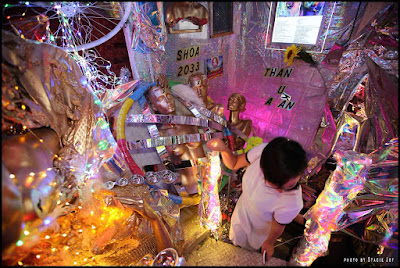 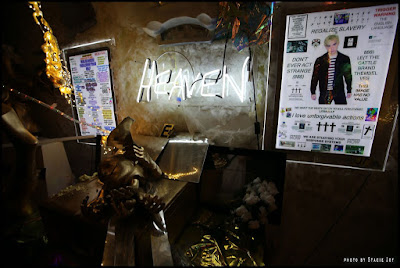 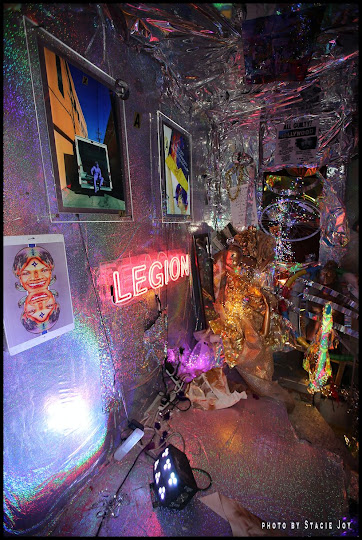 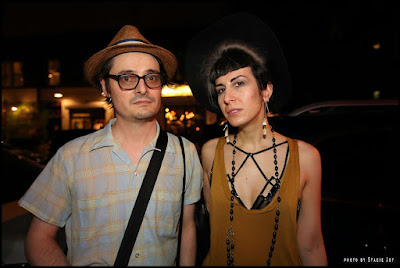 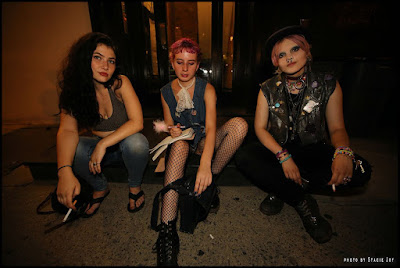 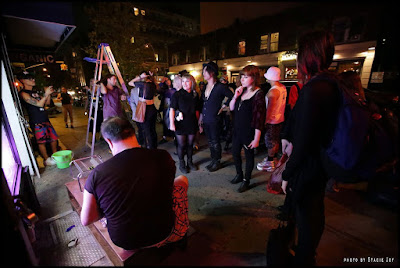 Previously
Posted by Grieve at 8:52 PM

Woot better than Burning Man without the big Bucks

This is great stuff. I imagine that the basement of the Vatican is filled with art just like this.

Friend of the person who bought and cared for the flowers said...

These assholes stole sunflowers off of the nearby tree planter. You could see the flowers through the window.

Any connection to the guy who's been stealing the flower pots on St. Marks Place? It might be time to make up a new Official Police Flyer.

I like this kinda throwback artist scene shit, but...how exactly does it pay off? What pays the rent in that space in the here and now? Is it a real gallery for left-field purchasable artwork that exhibits in cycles, or a showcase space for installation pastiche theater?

I remember when there were lots of places like this back in the day, but didn't think they could ever exist anymore in this city unless you got deep pockets of money to burn on a storefront.

the exact same place was on east broadway a while ago; love the neon and tinfoil but i can't afford it

I love this gallery. It's just plain bats.

This was the most self-indulgent nonsense that I've seen in a long time.

The current crop of these modern artists, in addition to these artisan chefs and fashion designers involved in the pop up phenomenon are probably being funded by banks, developers, or LLC's, which would have members in both massive money making fields.

Something has got to fill those vacant commercial properties since they are forcing long-time establishments to leave town after obese rent increases. And why not these arbiters of the city and state funded imbecile zeitgeist.

Satan is so 20th Century. Is this supposed to be nostalgic?

Are you sure that's where the sunflowers are from? I am going to talk to my man who tends that garden, a long time resident who's name I have forgotten. Might have to pay this little piss ant gallery a visit if that's the case.

I miss snack dragon :-(
Now we have insufferable rich twats who still think satan is edgey.

wow it's like they studied the fashions and styles or artists from decades before they were born and just emulated them, but in a knock-off pretentious way! NYC art is dead.. all that exists now is trendy trust fund cool hunter fraudsters perpetuating the guise of struggling artists, but it's obvious they're all trying too hard to be something they aren't, something they weren't born into.. and that's poverty and struggle.

Stop ripping off other people's ideas and culture from 30 years ago and use your brain to create something new that's your own.. but NOPE that's too much to ask in the age of copycat fakers. They see authenticity in what the old school people did, so they think if they play dress up and act the part they'll be legit artists too. But it falls flat.. and it's a vapid waste of space. Just go away rich kids, use your endless wealth to create your little self-congratulatory playground elsewhere.. you've already ruined NYC.