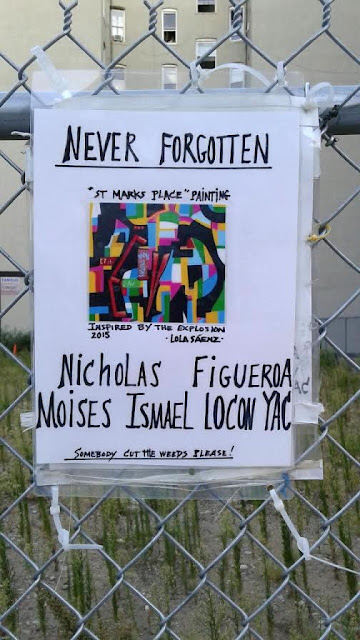 Last week, workers removed weeds from the empty lot at 123 Second Ave., one of three buildings destroyed during the deadly gas explosion on March 26, 2015.

There's now a new memorial sign on the fence of the adjacent properties, 119 and 121 Second Ave., which are owned by Maria Hrynenko, who faces various charges, including involuntary manslaughter.

A message at the bottom of the sign reads: "Somebody cut the weeds please!"

Nearby resident Lola Sáenz placed the sign this morning. "I made a new flyer. Since the weeds got cut on the right side lot, I'm hoping someone sees the note, and cuts them [at 119-121 Second Avenue]. It's starting to look like a forest."

In April 2015, Sáenz created an In Memoriam and left flowers for Moises Ismael Locón Yac, one of the two victims in the explosion. Sáenz said that she did it because his family is in Guatemala, and likely wouldn't have the opportunity to create a memorial at the site themselves.
Posted by Grieve at 11:30 AM

If the weeds are let go for long enough, they might become a meadow.

Without jumping into "make it a memorial park", etc comments, which is really better: A green space, even if it is weeds, or dirt? I don't think cutting the weeds will really do anything. Maybe throwing some wild flower seeds around will.

Some may see weeds, but I see wildflowers. I actually like seeing life take over this lot in the aftermath of tragedy. If we can't have a memorial park, it's nice to have a bit of nature. A little manicuring could do some good, though.

Those weeds, if left, will mean rats and other critters. Cut away!

It's not cemetary. It needs to come back to life.

on issues related to rats around here; "weeds" is about the bottom of the list.

the lot at 123 had a haircut because it's for sale.

hopefully the owner of 119, 121 (maria erynenko) will soon end up in jail. i don't think she cares if there are weeds on her lots.

I think someone should throw some grass seed over the fence. Sure, trim the flowers a bit too, but a grassy lot with some weeds will look more appealing than a dirt lot with weeds.

What are the plans for the lots?

Heck. Sign me up. I pass this each day and want to pull the weeds myself. There should be a day where members of our community participate in cleaning the area up since the owners of the space don't give a shit. It is starting to look like a jungle of sorts. Not a good sight. How can we do this to make it look better?

What if she's not guilty?

Without jumping into "make it a memorial park", etc comments, which is really better: A green space, even if it is weeds, or dirt? I don't think cutting the weeds will really do anything. Maybe throwing some wild flower seeds around will.

I'm confused, weeds are plants, life. let something grow there where only horror and sadness has. sometimes we over react.

Scuba Diva - You have changed my life! Where can we get this in America?

Morning glories on the fence would be nice, like there used to be on the Mystery Lot.