New Museum announces exhibition on the work of Raymond Pettibon 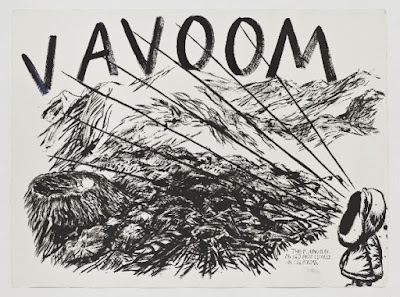 Via the EVG inbox today...

In February 2017, the New Museum will open a major exhibition focusing on the work of Raymond Pettibon. For over thirty years, Pettibon has been chronicling the history, mythology, and culture of America with a prodigious and distinctive voice. Through his drawings’ signature interplay between image and text, he moves between historical reflection, emotional longing, poetic wit, and strident critique.

Although Pettibon is unquestionably a pivotal figure of American art since the 1990s, he has never before had a major museum survey exhibition in New York. “Raymond Pettibon: A Pen of All Work” at the New Museum will be the largest presentation of Pettibon’s work to date, featuring more than 700 drawings from the 1960s to the present. It will also include a number of his early self-produced zines and artist’s books, as well as several videos made in collaboration with fellow artists and his musician friends. This unique collection of objects and distinctly immersive installation will provide insight into the mind of one of the most influential and visionary living American artists.

Occupying the three main floors of the New Museum, “Raymond Pettibon: A Pen of All Work” will be on view from February 8 to April 16, 2017.

The New Museum is at 235 Bowery between Stanton and Rivington.

You can check out a gallery of flyers Pettibon created for Black Flag here.

You all are lucky to get to have that kind of exhibition. Sorry to have to miss this one but I would need a place to stay and on my budget, I would have to stay in the park. Does NY even have any squats anymore?

I want a Winsor McCay exhibition. Who's with me?!?

His first exhibition in New York and it is ALL his work. What is with the New Museum?

not his first; there was one in soho several years ago