A new garden for Eastville Gardens on Avenue C 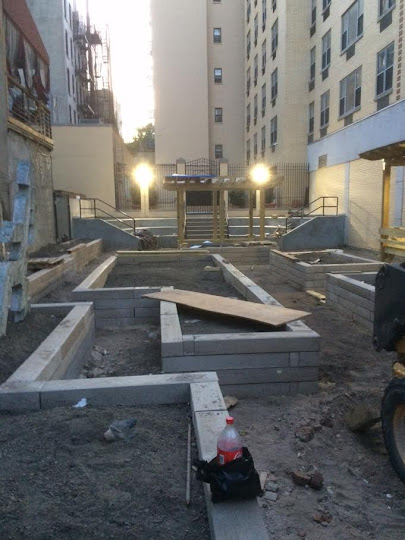 [Photo by Matt on C]

In recent weeks workers have been building what appears to be a garden in the empty lot between Eastville Gardens and 115 Avenue C. (Between Eighth Street and Seventh Street.) 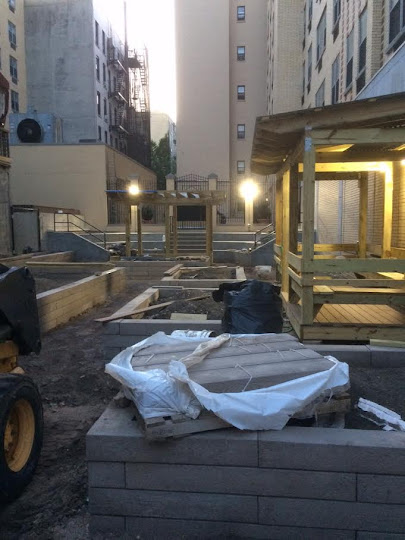 [Photo by Matt on C]

Eastville Gardens, whose official address is 342 E. Eighth St., is on the site once occupied by El Jardin de la Esperanza. At this point it's not clear if this space will just be for residents of Eastville Gardens... or if this might be opened up to the public. (One commenter said that the garden would be in honor of Carmen Pabon, a longtime activist dubbed the "mother of the Loisaida.")

L+M Development Partners bought the 7-story building that includes the Associated for $44 million back in the spring.
Posted by Grieve at 4:17 AM

I was told many years ago that a part of the deal when the "Don" Cappocia got the lot after the garden was bulldozed he was required to preserve that lot as a community garden. Of course that never happened, but this better not be a case of public land going into the hands of private developers. Maybe our Mayor has already allowed this restriction to lifted in exchange for a re-election campaign contribution. Does anyone else out there have a recollection similar to mine? If so perhaps CB 3 Land Use can do something about this.

Yes, I also thought that the garden site is _still_ an official community garden. However, yes, the developer has kept it locked down for years. I think part of the story was that the garden had to show that is was a real garden, with gardeners, a plan, etc. and while the garden had that before it was locked down, I suspect the last members have finally moved away and the developer feels confident reclaiming the land. This is a case where all of us should call the city, our representatives, Green Thumb, etc. and say "Hey, wait a minute, this is a community garden, not a private garden. Can you help us sort this out?"

Perhaps someone here knows more of the details? Please share. What are the options? What was the original deal? That Villager articles doesn't really address it.

I was told many years ago that a part of the deal when the "Don" Cappocia got the lot after the garden was bulldozed he was required to preserve that lot as a community garden.

True; this is why he was unable to build right up to the little building where Le Jardin Bistro closed a few months ago, and was required to leave this sliver of space. The yard left there has been the subject of contention for all the years since the building of Eastville Gardens, and since I live around the corner, I've been nervously watching it when there's been any activity.

The mural left on the small building on Avenue C is protected by the same verbal covenant that states it must remain "in perpetuity"—whatever that means—which is why I certainly hope this refurbishing of the garden is truly for the community.

It looks extremely uninviting, shoehorned in-between two buildings the way it is.

As I recall from a Villager article about a dozen years ago, Carmen Pabon had the right to run the garden on the privatized property. Instead, heart broken, she took as many plants to her NYCHA apartment that she could fit, even as they struggle for light.
The deal, most noted for saving that wonderful mural, was brokered by Councilwoman Lopez. Her Chief of Staff is our current Councilwoman, Mendez. She might have the institutional memory and might to keep it accessible to the public.