How was your Margarita March? 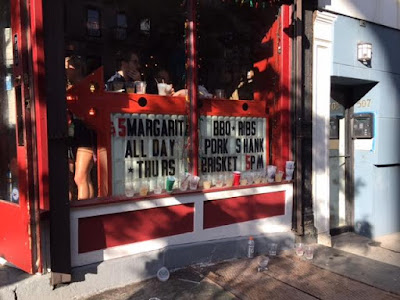 The 2016 NYC Margarita March is this weekend... and today is Day 2. There are eight bars participating today, and five of them are in the East Village: Mama's Bar, Avenida Cantina, Finnerty's, Juke Bar and Double Wide.

One 12th Street resident described the Margarita March scene ("it's like SantaCon but with margaritas") outside Doublewide yesterday.

This afternoon has been pretty hellish. There were lots of people outside talking and yelling and drinking. They were coming out of the bar with clear plastic cups and drinking on the sidewalk and being totally obnoxious ... I heard the chant "chug, chug, chug" coming from Doublewide Bar. No kidding!

The resident did file a complaint with 311.

Doublewide isn't the only bar taking part in this mayhem. I don't get why they do this if they aren't going to control their patrons.

Unbelievable. Why is this legal? Who thinks up, plans and coordinates boozefests like these? Why aren't permits required, so they can be turned down? Why don't the cops clamp down on the illegal drinking? And most importantly, why do these drunkard morons get to do whatever the hell they want in a neighborhood they don't give a rat's ass about except to make noise and throw up in???

Double wide is a nuisance and just does whatever they want and completely disregard their stipulations with the SLA and CB 3. How is this place a restaurant?

YOU CAN REGISTER A COMPLAINT ABOUT ANY ESTABLISHMENT SUCH AS THIS DIRECTLY TO THE NYS SLA WEBSITE:
https://www.sla.ny.gov/register-a-complaint

and send a copy to cb3

I wondered what this was. There were a LOT of blonde ladies all looking terribly out of place as if just stepping off the bus from an Iowa mall. I thought this was some religious tour at first, but then I saw a bunch of tigers in hot pink tank tops loggerjamming the sidewalk with the word "Tequila" written on them and thought immediately: TAO (Tourists Acting Out).

The drunkards were getting into it with a lady on 12th Street who told them they weren't being respectful. She was right!

This area is a fucking joke.

I ran into this group on Avenue B wearing sombreros. They seemed to be older than the average pub crawlers. I'm not being ageist but they were all in their mid 40s. They were really drunk as you'd expect from people chugging margaritas

Each ticket entitles you to drink eight margaritas at eight different venues. Eight! Most people would already be pretty drunk after quickly downing two or three half-decent margaritas. The last thing you should be doing while drinking eight margaritas is marching anywhere. This event is just another disgrace in New DeBlasioville.

Eight? Liver transplants for everyone at the last venue!

If you build it they will come. I blame the establishments.

I thought it was an NYU parent/student event at first because of the mix of ages and the lanyards but then I saw their badges said Margarita March. One gray haired woman who looked to be in her 60s was so drunk she couldn't even get up the one stair she had to step up to get into the door of Double Wide. She kept falling backwards.

Yoooo. Fucking Mama's Bar, the place that was once was a chill dive and is now douchebag TRASH hell, had people ALL OVER the sidewalk with blue cups as security looked on. Called 311, and then when I checked on the status, it said police found no evidence of anything. Such a joke. CB3 pay attention!!! I hate these kooks.

As somebody else mentioned, I also thought it was some kind of religious meet-up group then not to long after I heard Woo-ing echoing through the neighborhood...then I realized. It ceases to amaze me; WHY, why, why would you want to come to a neighborhood known for it's 'vibrancy' and do something that totally negates it. 'Margarita March'? Isn't that something they do during Spring Break in Florida? I mean..c'mon people!! And eight Margaritas? WTF? I mean I like to party, but you wanna know how much sugar is in just one? How about shoveling a few spoonfuls of sugar in your face and just washing it down with Tequila. Same thing.