Another no for Cholo Noir 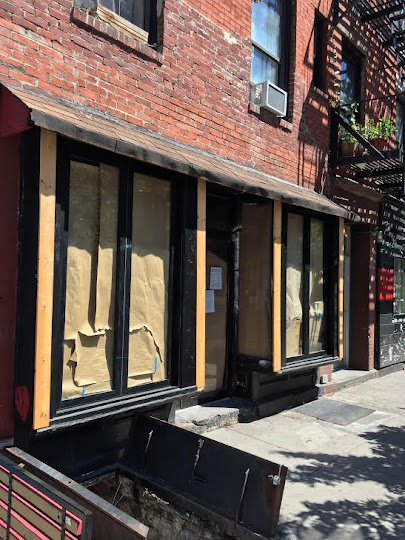 Renovation work carries on at 503 E. Sixth St. between Avenue A and Avenue B... where there are plans for Cholo Noir, a restaurant serving Southern California-style Mexican with a bar and art gallery.

In June, the proprietors, Lennard Camarillo and Arlene Lozano, appeared before CB3 in June for a new liquor license for the space.

CB3 recommended to deny the application for a variety of reasons, according to the official minutes from the June meeting. For starters, there are 25 full on-premises liquor licenses within 500 feet of the address... plus CB3 didn't see how a Southern California-style Mexican
restaurant was a public benefit given the number of places in the neighborhood to get the same kind of food. In addition, the applicants only collected seven signatures of support from neighbors, according to the CB3 minutes.

However, the Cholo Noir folks returned to face CB3 on Monday during the August meeting. As Bowery Boogie reported, the applicants made their pitch: "There would be an authentic vibe imported from the West Coast; street artist Chico would be the first artist in a monthly rotation of work. CB3 wasn’t so much feeling it, and denied the application."

The owners have put a lot of work into the space to date. Camarillo told DNAinfo that "his team will take its case directly to the State Liquor Authority in hopes the agency rules against the board’s recommendation." If granted a license, then they plan to be open in October.

No. 503 was previously home for five weeks to Long Bay, a Vietnamese restaurant, last spring. (I don't recall them serving any alcohol.) Several years earlier the space housed Gladiators Gym.
Posted by Grieve at 4:00 AM

Well, the name and logo have a gangster vibe, and if you'd been down here long enough you'd have known the real gangster bars. This one's fake of course. But the vibe just rubes some of the old timers the wrong way, I'm sure.

How could the owners spend all that money without a liquor license already in hand? We have laws prohibiting the explosion of bars and place serving alcohol here yet seems like they are just a suggestion, sigh.....

Who needs them, who wants them. Go back to California.

Same owners as Florencia 13, no? Seriously, it was an out-of-towner who told me about the place after I was bemoaning the lack of really good So-Cal Mex in New York City. This was good food with a good reputation before they closed last year after 10 years. And they had a full liquor license at that Greenwich Village location.

But CB3 does not take success in another neighborhood to have any relevance in their decision.

I live in this building and I'm a little worried about the new restaurant.

The old restaurant that was there (barely open for a few months) suffered in that they didn't have gas stoves. They were cooking on all electric because the space doesn't have a gas hookup. They also had other issues besides the lack of gas.

The super told me that the city would have to open the street and charge $100,000 to run gas into the building.

Now that this new place is going in and it's clear that no installation work by ConEd has been performed, I'm wondering if they are also cooking on electric _or_ are they illegally siphoning gas from an adjacent building. We all know how well that turned out for the buildings at 7th Street and 2nd avenue.

It's not like that space hasn't been fined for illegal construction. The space was originally shut down before the previous restaurant after they were caught doing a bunch of construction illegally.

Recently the workers from the new building on 100 Avenue A took down the entire back wall of the space and replaced it - without any permits as far as I could see posted.

It's amazing what you can get away with in a city that doest have enough resources to inspect all the construction going on. Do what you need to do and pay the fine if you get caught.

No means no, guys. Going above the neighborhood's head is no way to make friends. There are plenty of other spaces in NYC for you to try.

As for the illegal construction and gas activity, report it to 311.

I would like to see them get their license. I like this place, and a couple of drinks with dinner would be perfect. And by the way, I live in this community and I appreciate that they're making this extra effort.

When you read the comments on every other blog/site regarding this topic, people are in favor of the liquor license. Only here are they opposed.

Guess the owners of this place won't grease the palms of CB3 so they go over their heads to the SLA... they'll probably get it too