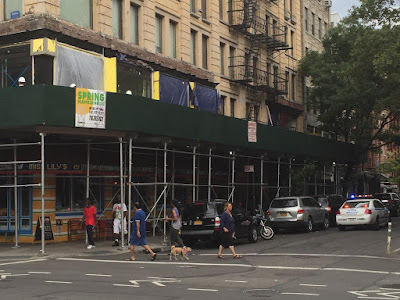 Throughout the summer a crew had been working on the second floor at 130 E. Seventh St. ... in the space above Miss Lily's.

All that was finally cleared up a few weeks ago... and over the weekend, for lease signs arrived in the second-floor windows offering Park View Office Suites ... 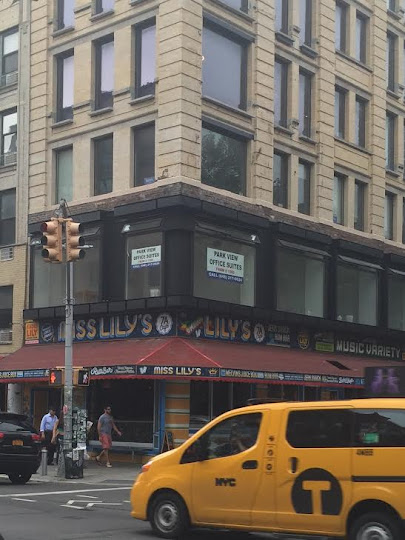 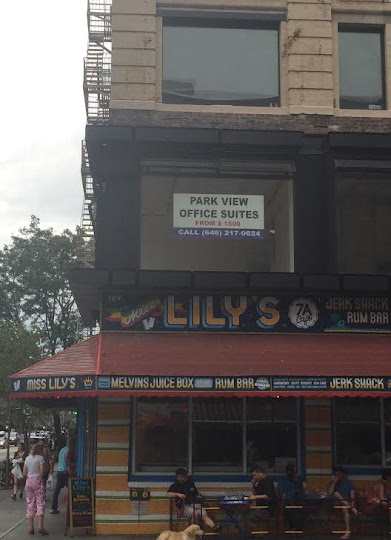 We haven't spotted a listing for the offices anywhere. The number goes to an answering machine.

The 7-floor building on the southwest corner has been through a luxury makeover in recent years. The new residential rentals were fetching $16,995 and $14,995. Longtime corner restaurant 7A closed in January 2014... and later replaced by Miss Lily's.

Public records show that the University of the Streets sold the building to Park Corner Development, LLC in September 2011 for $5 million.

After 46 years of music and arts programs here, the University of the Streets cleared out of the second floor in April 2015 and relocated to the Bronx.

Thanks to Steven for the photos 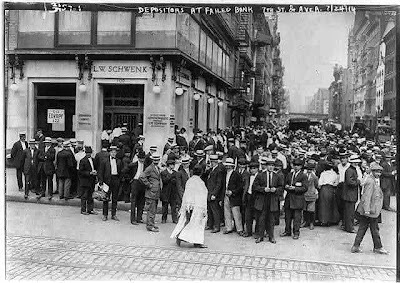 Previously on EV Grieve:
Penthouse life above 7A will cost you $16,995 monthly
Posted by Grieve at 4:19 AM

Email ThisBlogThis!Share to TwitterShare to FacebookShare to Pinterest
Labels: 130 E. 7th St., 7A

Wow. That photo is amazing. It is a window into history. Love it.

As far as the space goes, I would never live here, even if I had the money to do so. Who wants to live above a rowdy restaurant like Ms. Lilly's and the insanity that is the weekends with bros, sorority girls, and assholes galore who invade all of our bars and restaurants? Let's admit, this part of the neighborhood is a shit show much of the time. I can't imagine older people past 40 with real careers and lives and families would or could agree to live there. Maybe someone in their twenties or thirties who were born with silver spoons in their mouths or who made a killing on Wall Street. Only they could afford something like that or the new condo building across the street. RIP East Village :(

Anonymous 9.57, I could not agree with you more. And I LOVE that bank image.

RIP East Village is right. It's over and been over since '91.

Seems like a pretty sweet office space. Wouldn't mind if that's where I had to go to work.

Well I'm guessing the way they are getting around being above a bro playground is by marketing the floor directly above the resturant as "office space" one would assume during daylight hours it would be tolerable.

Wish they still had cobbles on Avenue A; for one thing, the cars might exercise more caution.