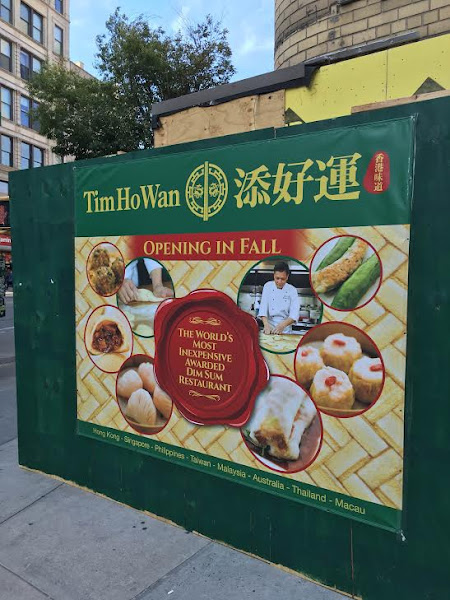 Here's more about Mak and the operation via The Village Voice, who first reported on this opening back in April:

In 2009, Mak left Lung King Heen — a three-starred Cantonese restaurant at Hong Kong's Four Seasons Hotel — to open the original Tim Ho Wan in a Kowloon neighborhood. When rent rose thanks to gentrification, Mak moved the restaurant rather than raise prices. Six years after earning his first Michelin star, little has changed.

Steamer baskets of plump prawn dumplings, Mak's signature trio of baked buns stuffed with barbecue pork, and Chinese-sausage-stuffed glutinous rice wrapped in lotus leaf all remain under $5. Even now, the tissues within the boxes placed atop each table serve as napkins. Meanwhile, diners still choose dishes pictured on a paper placemat, fill out their checks with pencils, and rinse their chopsticks in cups of hot tea.

If lines out the door aren't already profitable enough, the New York Tim Ho Wan will also have a liquor license. While the menu will continue to be strictly limited to dim sum, the menu will grow over time and add more dishes appealing to American appetites, including "high quality beef dishes."

The address previously housed Spice, which closed in December 2014.

Previously
Posted by Grieve at 4:23 AM

Sounds like good cheap eats will be back in the EV?

Or go to the dim sum palaces in Chinatown for an incredibly variety at a lower cost!

Remember the old Chinese saying, "You don't have to be Bright to love Dim Sum."