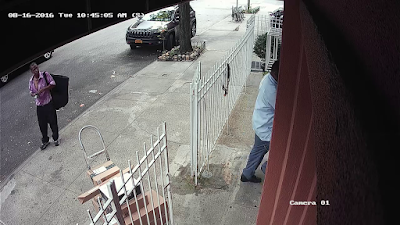 An EVG reader shared this:

My building on East 11th Street between Avenue A and B had some packages stolen yesterday. After reviewing the security footage we saw the guy in the purple shirt hanging out on the sidewalk pretending to be on the phone and then he followed the USPS guy in after he was buzzed in.

He then proceeded to fill his large bag with the packages that were just delivered and left. 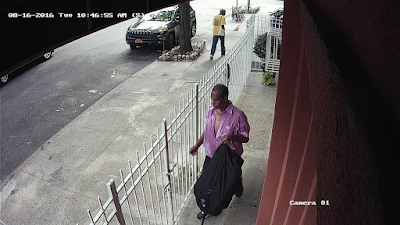 Previously on EV Grieve:
Watch this man help himself to packages from an East 7th Street lobby

Another report of stolen packages from an East Village lobby

These delivery guys are on some bullshit lately, leaving packages whenever they want and letting strangers into buildings. They can't do that shit! I had an argument with a delivery guy the other day where, instead of buzzing the apartment of the person the package was for, he simply tried to just walk in and leave it in the hallway. I told him to please buzz the person and I can't let him in the building to have the resonsibility of leaving it in the lobby. Many things have been stolen.

I see a felony charge looming for this asshole...

So how do we stop this? Any ideas beyond telling people not to order stuff online anymore? Like most others, I live in a non-doorman tenement building, and people are coming and going all day. It is easy for someone to slip into our building, and the packages all sit right there in the entryway. Our hallway is narrow, so I can't imagine the landlord would be able to install package lockers.

This has happened to many non doorman buildings in the east village recently and I'm sure all over the city. It happened in my building this year and it was the fault of residents of my building, some are too meek to demand an unknown person to use the intercom of someone following them into the building and foolishly keep the door open and let the unknown person into our "secure" building! Keep your guard up and stay vigilant kids... you're not in Kansas anymore!

Shameless self-promotion of my startup here, it's called eNeighbr. For $5 lousy bucks we'll hold your package at a neighbors house who is there to sign for it, so it never gets stolen...

We really have to be okay telling people no they can't come in to the building. It's uncomfortable, but who gives a fuck? Do you want stuff stolen or your apartment broken into?

I'm a long-time EV resident, and have had a couple deliveries stolen from my building. About 6 or 7 years ago, I started having deliveries sent to the packaging store at 200 East 10th street, just east of 2nd Ave. They now charge $4,50 per package, but I think the security is well worth it.

I don't want to meet my neighbors.

Look at this big-bag-carrying-Santa-Claus-Christmas-in-August motherfucker!

On 2 different occasions I saw people at the corner of 13 and B opening packages and trying to sell the contents to passersby.

Did you call the cops? If not, why not?
Oh, I forgot, this is NYC aka Havana on the Hudson, and the cops don't care about your property.

Check out Doorman.co, they'll hold your packages and then deliver to you when you're home in a one hour window.

Yeah all of our stuff is just left in our lobby lately or even in the small area in front of the lobby where you dont need a key to get in. Fed Ex and USPS both know i am home during the afternoon a lot and they buzz me to get in to the building a lot and when I do that I make sure to grab my neighbors stuff for them. Shawn's idea is a good one.

So how do we stop this? Any ideas beyond telling people not to order stuff online anymore?

There are mailbox services in the neighborhood, including East Village Postal; yes, a mailbox there costs about $1 a day, but I try not to let anyone ship things to my home address. Most of theses mailbox places will receive UPS, FedEx, DHL, and others; otherwise I'd get a post office box.

And in my building, I often see packages left in the vestibule, which is total bullshit, in my opinion.

If I didn't work during the day, I would stalk this guy so hard. I think I'd quietly tail an Amazon delivery guy from across the street. Now that we know he's active again, it probably wouldn't take too long to come upon him waiting "casually" on the sidewalk with his thief bag. I'm not into spy scenes normally but THIS ONE IS PERSONAL.

I know it ain't ok for delivery drivers to mess up but it is a hard job, actually pretty fucked up, and the pay isn't that good.
These are privatized companies here to make money! Not pay their workers.
Have you ever had this job?
Maybe a dollar tip and some thanks would make things a little better.

I'm just scratching my head that this guy wasn't like HELLO, SECURITY CAMERA!

When I'm folding my laundry in the basement, I always have my back to the camera, but it isn't like I don't know it's there. Anywhere I go in NYC, I assume I'm under surveillance—frankly, that sucks balls.

But I hope they catch this guy.

USPS guy was negligent in letting someone follow him in. The package snatcher has some distinctive markings on his left forehead...

i is not the delivery guy's job to decide who gets into a building.
s/he is merely delivering packages. in and out. that's the job.

while we'd like people to step up, to be considerate, aware, helpful, thoughtful, etc. it's not part of the job. some guys go the extra step but we can't expect it.

also, it's not just ups and fed ex. there are deliveries from restaurants, groceries, and more.

@ 9:24 AM. Delivery people have to exercise due care. suppose someone is assaulted or raped would by someone walking in behind them would you argue no responsibility of the company?

I just saw him passing by in front pf my building on 11 between B and C.. With his black bag and an Amazon package in it. Because I'm still thinking I'm Wonder Woman I try to make him stop yelling call the cops! Nobody reacted and I had to stop because I was with my 2 little girls. I feel like printing posters

Now i get why i saw a dude with a giant suitcase opening it up pulling out random boxes (clinical strength deodorant, vitamins, batteries, ect).

Delivery guys honestly just don't ever give a f*ck! they just don't.. i've had packages left outside my building when i was HOME waiting for them to deliver.. no buzz, no indication they were even delivering.. just left it outside on the stoop. luckily a neighbor saw it and dropped it by, but god dammit it makes me mad.

These self-absorbed delivery guys shouldn't even have a job if they can't be bothered to even buzz you when they're dropping of your package that you paid for! half the time they're just on their phones talking shit to their friend or chatting up a chick.. that's High School shit! you shouldn't even have a job if you can't be bothered to fulfill the simplest aspect of your job! lazy pieces of shit, but how dare you even try and question them about a package!