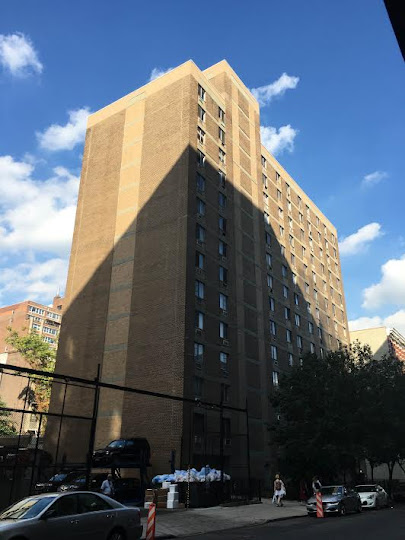 In announcing plans to shutter the Mount Sinai Beth Israel campus on First Avenue and 16th Street in the coming years, officials said this past spring that they'd open a smaller, 70-bed facility on 14th Street and Second Avenue. (Mount Sinai plans to sell the 16th Street property, which is valued at about $600 million.)

Per a news release issued in May:

Central to the downtown transformation is the new, smaller Mount Sinai Downtown Beth Israel Hospital, which will include approximately 70 beds and a brand new state-of-the-art Emergency Department (ED), located at 14th Street near Second Avenue — just two blocks south of the current Beth Israel campus. This ED will accept ambulances and will be able to handle all emergencies, such as heart attack, and stroke, on site. It will also include a pediatric ED. Patients with the most complex conditions will be stabilized and transported to other hospitals in the Mount Sinai Health System.

Officials have yet to divulge the full plans as to where all this will be housed. Here's one clue: On Monday, the DOB ok'd demolition permits for 321 E. 13th St., a 14-floor building (top photo) between Second Avenue and First Avenue that houses training physicians and staff of the nearby New York Eye and Ear Infirmary.

DNAinfo, who first reported on the demolition yesterday, has the story of one of the building's residents, Billy Ortiz, a disabled former hospital employee who requires frequent dialysis treatments. Ortiz and several other residents, including some longtime nurses, say they are struggling to meet the deadline to vacate No. 321.

A hospital rep declined to specify what will be taking the place of the East 13th Street residence, DNAinfo noted.

It's also unclear how other buildings in the New York Eye and Ear Infirmary of Mount Sinai complex, such as 218 Second Ave. (below), might be impacted by the new facility. Previously
Posted by Grieve at 4:32 AM

I never knew that was a residential building. I do remember when I first moved to the area, the sub-ground walkway around the perimeter of the building (in front) was home to stray kittens, and I used to lean over the rail and watch em run around (they seemed pretty happy and safe down there). It's a nice building. This makes me sad, but what doesn't these days.

Can't blame them, $600 million is a lot of chicken nuggets.

to demoish 321 E 13th St and probablyall ofthe other holdings of Mount Sinai Downtown Beth Israel Hospital is the epitome of stupidity.
the mayor and city council and non-profits keep bragging about creating and retaining "affordable" housing (no longer low income housing) as they allows the destructuon of sturdy perfectly viable building so a hospital (receiving tons of government monies) can sell to developers.

forget about the years if down time while all this gets processed and residents and patients are removed - tell us how they will be able to provide better services to the community by destroying all of the many hospital facilities it now owns around here; thereby removing ALL hospital services; to one day rebuild some of it; while selling off most of it to developers for gobs of money.

Very sad to see this... I grew up in this building; my mother worked at NYEEI. The location and the subsidized rent couldn't be beat! That ugly building holds a lot of memories for me.

How could they build an ER hospital on 13th when it isn't zoned yet? I'll tell you how...THE FIX IS IN, NEIGHBORS. Our local politicians are very quiet about the issue... They are so quiet you would think we have no local politicians... Surprise, maybe we don't. Why isn't there public debate? Where is Mendez? Maloney? Holman?

i thought the epitome of stupidity was Donald Trump.

I do not want to make everyone too cynical but one of the hospital board members is telling us that Mount Sinai had planned this closure when they bought the hospital.
The new "hospital" with be a glorified urgent care... Whole departments are now moving uptown before the hospital is even closed.
The hospital never had a decrease in volume or a decrease in need...
There was just too much money in the Gramercy real estate.
DeBlasio does not care since he gets so much donation money from the real estate interests...
(anonymous depressed physician)

In the 50' there was a phrase "Urban renewal is Negro removal." In the new millennium it's broadened its definition to: the removal of the 99% by the 1%. How can you put up a billion dollar project on that plot of land and have sick people, ambulances, cops and sirens and multicultural workers and junkies and families and poor people in the area? You can't. So you hide them on 13th street and say that the reduced services are enough for sick people today. Catholic schools, churches and hospitals are the targets of big developers. You watch, not one of our local pols will say a word. One party rule has ruined this town. We should have an open primary. Half the garbage that gets passed by the city council wouldn't stand a chance. And maybe, just maybe a leader that works for the people, not the party orthodoxy will raise and give us , all of us a chance.

This is the second or third hospital DeBlaz forgot to do his Smack Down routine, which we all thought was so adorable back in the day.

@1:25pm: I believe you. And for this reason I don't trust Mt. Sinai or any of what it says. They are now more interested in the real-estate business than the health-care business, IMO.

I wonder if the "Beth Israel condos" (as I will ALWAYS think of them, no matter what frothy name they give the new development on Rutherford Park) will, like the condos where Bowlmor Lanes used to be, start at $6 million? (And I will always think of that building as the "Bowlmor condos".) Or will that be too affordable by the time it comes to market? Maybe "starting at $10 million for a 1 bedroom"? Time will tell, and those numbers are plausible, b/c it takes a lot of $$ to keep the authorities on your side.

Just google "Saint Vincent's Condos". Prices start at seven million. They said they would have a hospital there too but put up an urgent care. Get sick and they transfer you to Beth Israel...

Wow, they're going to be making so much money buying and closing these hospitals. I'm sure their CEO is happy.